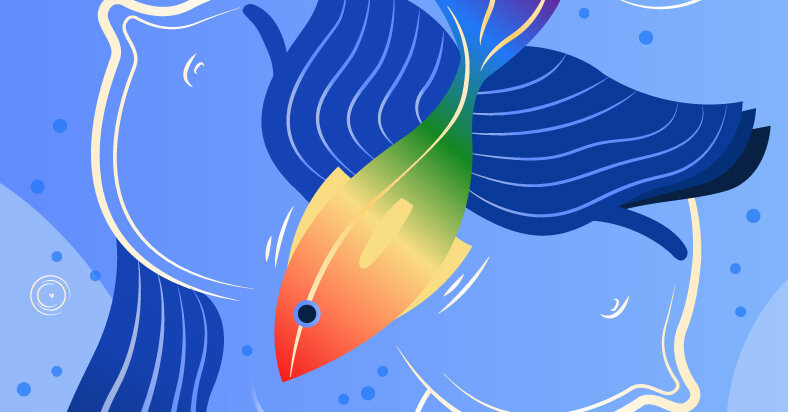 A genre as fluid as water and a body in crisis

THE VOICE OF THE FISH: a lyrical essay, by Lars Horn

In the depths of the ocean, creatures make their own light. There’s the angler fish, which lures prey to its massive teeth with a dangling glowing bulb. Or the siphonophore, a scintillating, self-cloning organism that can grow longer than a blue whale. Their brightness belies the darkness of the deep sea, how little we know about what lives there. “What must they witness as they slowly pulse through the world?” Lars Horn, the author of the delightful lyrical essay “Voice of the Fish”, evokes these creatures older than humans, older even than some cities.

Horn, a British writer and translator who uses the pronoun “they” (although he finds pronouns to be “slippery and distant things”), is the mystic David Attenborough. They would have been Pisces had it not been for a difficult pregnancy and the insistence of their mother and aunt that a particular birth date be avoided – a birthday for two male relatives with “aggressive tempers, a certain disdain for women “. This is how Horn was born under the astrological sign Aries and was assigned to a woman. After leaving home years later, a healer, wanted for a foot injury, told Horn it was “a belated change, by fate, to see you born in Aries and not Pisces.” . He seemed to know that intuitively; Horn hadn’t mentioned anything about their anniversary. “You have to swim to Pisces,” the healer said, after gently washing Horn’s foot. “Water, you have to go to the water.”

The book’s underlying narrative, made up of stories, myths and vignettes about marine life, is that of another, more serious injury: in 2014, the author tore the muscles in his right shoulder to the lower back by lifting weights, leaving them unable to speak. or read for months – a forced stillness and quietness. They had endured such deadly stillness many times before. Horn was the only child of a single mother, an artist who posed Horn to appear dead for photographs and installations and had them sit for full-body plaster casts. The body always adapts, the book states. As fluid as gender, like a shifting tide, it shifts in response to pressures, which are detailed in vivid narratives here: the transmasculine renaissance, transphobic places in Russia and Florida, violence and injury, and the inevitability of disability.

Ian Rankin: ‘The Prime of Miss Jean Brodie is a perfect gem of a story’ | Books

Pride month opens with celebration and new anxiety in DC