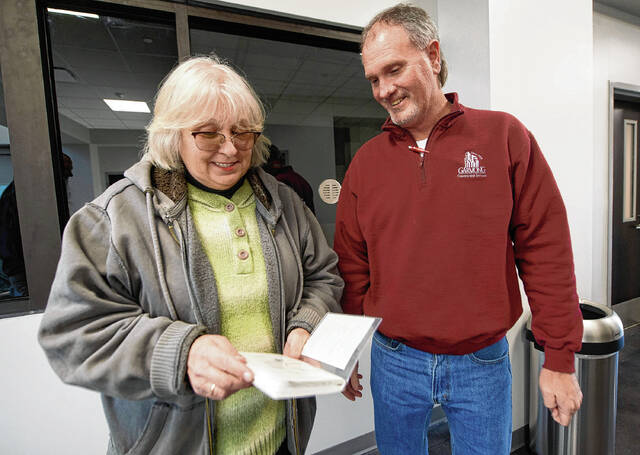 HANCOCK COUNTY – Anna Tungate has always been proud of her older brother Randy, whom she described as a gifted writer. He was a Vietnam veteran who used his creativity to write a book of poems, “The Prisoner of War in the Mental Palisade.” The poems helped Randy overcome the anxiety associated with his years of service with the US Air Force’s 8th Airport Squadron, Anna said.

Randy Tungate died on April 20, 2019. Anna, who lives in Shelby County, often took her poetry book with her. She shared it with others, including allowing some to borrow it.

“I always had the book with me because I was always trying to get it published,” Anna said with a smile.

After her brother’s death, she lost track of the book. She didn’t dwell on it until recently, when Shelby County Sheriff Louie Koch surprised her one day with a revelation: Hancock County Sheriff Brad Burkhart knew where the compendium was. of his brother’s poems. It had apparently ended up in the drawer of a second-hand desk that had made its way from Shelbyville to Greenfield.

In January 2020, Steve Ward, the construction superintendent for the new county jail, visited the offices of the Shelbyville News to retrieve several desks and chairs for use in the construction trailer while he oversaw the project. This is where he recently found the book hidden in one of the desk drawers.

The book of poems sat safely in the back of the drawer, just waiting for someone to open it, Ward said.

When he came across it, he immediately knew the book was something special, so he contacted Burkhart to see if the sheriff could help locate the writer or owner of the book.

“The book was still in great condition and I knew it was something special,” Ward said. “My dad is a Navy veteran and I grew up in a home where we respect all veterans, so if the sheriff couldn’t have located her (Anna), I would have kept this book.”

There was a clue: the book had a sticky note with the name “Anna” on it. And, since the author’s name was there, Burkhart did a simple Google search for writer Randy Tungate. Instead, he found Randy’s 2019 obituary. The obituary stated that Randy had served as a police dispatcher and reserve officer in Shelby County.

“It was really pretty straightforward after that,” Burkhart said. “I just contacted my buddy the Shelby County Sheriff, and he helped us find Anna.”

Koch and Anna already knew each other. The sheriff, teasing her, said she had to contact Burkhart because he had a warrant against her. Anna started to realize that something good was going on because Koch kept asking her about Randy and his collection of poems.

“I was so happy when the sheriff finally told me they had the book,” Anna said.

Anna visited the new Hancock County Jail on Tuesday, January 24, and met with Burkhart and Ward, who returned her brother’s book.

“It’s a cool little book and it had all these poems in it and we knew it was important to him (Randy) and still had to mean something to someone,” Burkhart said.

Ward called the book a “really interesting read” and told Anna he was thrilled to be able to return the book to a family member.

Anna noted that her brother, who was 13 years her senior, developed a love of writing from her grandfather and mother, who both wrote poetry. Anna is also a writer and works for Addison Times, a Shelby County online news agency.

In addition to the book of poems, Anna said that Randy always shares his work, and in 1990 he even finished second in one of the Riley Festival writing competitions. He had also turned one of his poems into a YouTube music video honoring veterans.

Before returning to Shelby County with the book firmly in hand, Anna thanked Ward and Burkhart for realizing the book was important to someone and taking the time to return it.

“I’m thrilled to death to get my hands on it again because it’s filled with all of her work,” Anna said. “Of course I will push for it to be released again.”