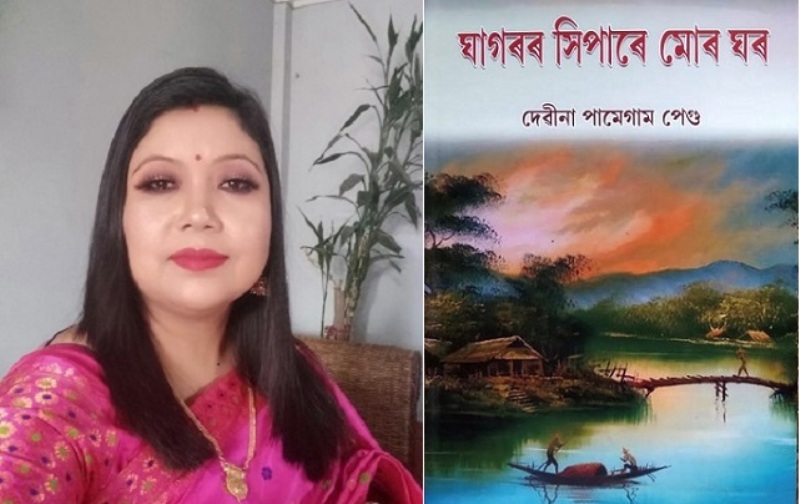 In her first book of poems “Ghagarar Sipare Mur Ghar”, Debina Pamehgam Pegu has made Ghagar, the unknown river of Assam, her poetic place and weaves her imaginary images with her magnetic ink. It is a river of Lakhimpur district which merges with Bogi river. The rains and the river have a special place in her heart and her imagination knew no reins when she started writing. In fact, it gives him an image of mini Assam where rain has a deep connection with the river in people’s daily lives. The riverine sensibility is best expressed in his poems in the book.

In Assam where the monsoon is celebrated by all poets in a romantic way, she felt it as a season of sadness. In one of her poems, she describes how heritage buildings and temples have been left to decay by excessive rains that have caused flooding and has come to conclude that the rainy season is for her “An elegy of hard times “.

The poet is shocked by other sad real life events and one of them is communal disharmony when houses are burned down, darkness is visible at noon. Debina is essentially a tragic poetess who imagines the pain in love. In a poem “Hridayar Rekha (Lines of the Heart)”, she imagines a moonlit night where a beloved awaits the arrival of her lover.

The graphic depiction of the nature and spirit of the loved one can hypnotize any reader and the poem ends in despair as the lover ultimately did not come. Waiting is love and here this waiting is in vain because of social barriers. Caste and creed in Assam sometimes trumps heart’s desire. This poem is a poetic protest against the social restrictions imposed by the so-called guardians of society.

The verse “Najano Kio Nahila Tumi” (I don’t know why you didn’t come) has an elegiac resonance in the poem highlighting the separation, longing and loneliness of a woman’s heart deeply committed to love. ‘a young man of others The colorful image of love on the map of his heart is erased by social restrictions.

She, poem after poem, meditates on the afflictions caused by the floods during the rainy season in Assam. But all these thoughts could not extinguish the romantic light that burns in her incandescent soul where she is downright Romantic. She sings of the romantic beauty of nature in Assam – floral ecstasy. In many poems she exhibits her love for the lingering idyllic charms as she gazes at the forest and the hills, rivers and trees which make her poetic.

In her poems, she wants to convey the message about the good hobby effect of poetry which can refresh and renew the mind. Basically, a poet by nature, she links her poem to contemporary social issues and that’s natural for a professor of political science.

It is quite interesting to know that her deeply romantic writings were inspired by real events and experiences she gained in her daily life. She explores the traumas and sorrows of the people around her while dwelling on nature. She is a lifelong writer and her upcoming books include a novel in which she primarily focuses on one woman’s struggles in her daily life. Almost autobiographical writings are also depersonalized by his skilful handling of situations.

She creates a poetic illusion and readers are unable to conclude with certainty whether the “I” in her poem is exactly the poet himself or not. It is his deep involvement and his experience of life that allowed him to express them with lively vitality. His observation is wonderful. In a poem about Father, ‘Deuta’, she reveals herself as a daughter. In the poem ‘Kanyasantan (Girl Child)’ the heartbreaking line ‘Let me live (mok jiyay thakibo diya) shows her bleeding heart.

In this poem, she focuses on the very common social curse where parents go for the determination of the sex of the child in the womb of a pregnant mother. It shows how society still lives in middle age despite all the so-called urban development. Inside our minds, we have not yet been able to erase our prejudices about a girl child. In her poem on ‘Ma’ or ‘Air Gharkon (Mother’s House’), she rightly feels that the debt to her mother can never be repaid.

In her poem on Father, she imagines a person who dreams of a new society free from all inequalities and hatred. Basically, Debina is a romantic dreamer and her sensitive heart bleeds on the thorns of life. She makes love an important theme in a few poems in this book where she depicts the various moods of a lover and a beloved from the daughter’s point of view.

Love is more about waiting and languishing than about fulfillment as all romantics know. In his poem “Chokur Polokote” (In the blink of an eye), his love involves the moon, the sun and the river” and this image of cosmic love with idyllic touches remains in his mind, where human beings become insignificant. .

In a poem like ‘Tumi Ahisila (You have come’) she is fully a free-spirited bird who wants to flee to the open sky leaving behind all social restrictions. She wants to see herself as an angel dancing in joy. This dreamer of moonlight and the river seems to be most visible in her poems of real-life sorrows and unfulfilled longings.

Dr. Ratan Bhattacharjee is a poet and columnist. He can be contacted at [email protected]