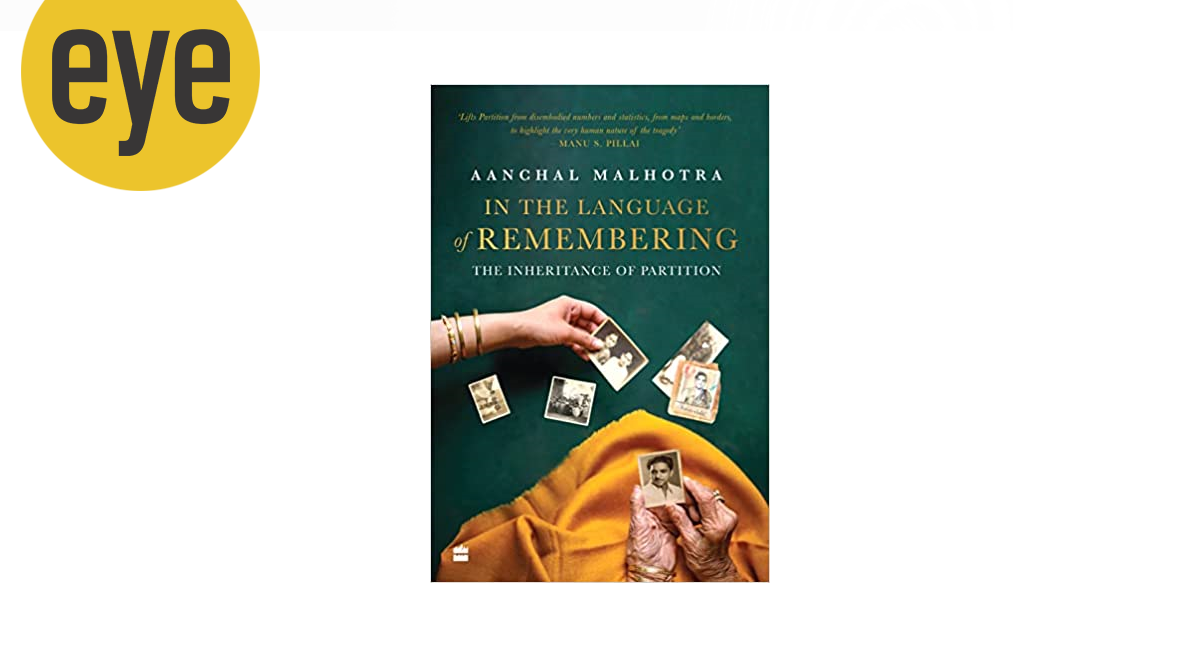 Among my fondest memories of my grandmother are her stories of her ancestral home and the stories of the family she married. She was not a refugee from Partition – my grandfather had emigrated with his nuclear family to Lucknow five years before the Muslim League’s Direct Action Day. But almost all of his relatives remained in undivided Bengal and the family would look forward to their annual visits during Durga Puja – celebrated with great pomp at the feudal estate of his in-laws.

At some point in Grandma’s story, there was a pause. Durga Puja tours are now done in Calcutta or other places in West Bengal. Grandma died when I was too young to connect the dots and relate this change in puja location to the score. Years later, as a history student, I did. But Grandma, too, barely mentioned Partition. And it remains a subject of curiosity.

Grandma’s stories kept coming back to me as I read Aanchal Malhotra‘s, in the language of remembrance; The legacy of the score. In his previous book, Remnants of Separation, Malhotra brought the memory of the Partition to life through objects such as jewelry, utensils, books, and even intangible artifacts such as ways of speaking. The language of memory concerns somewhat different memory carriers. These are personal stories, many of which have been passed down from generation to generation. Like my grandmother’s stories, these stories are less genealogical stories, more stories, many times even vignettes. Like my grandmother who spoke of Jessore, Barisal, Khulna – places where she once had family – their rivers, ponds, fish and vegetables, friends and neighbours, not India or Pakistan, respondents from Malhotra, too, rarely mentions the two countries. As she writes, “Silence can also carry, practiced by many and augmented by gestures of pain. But in the end there is something extraordinary Partition which denies South Asians the luxury of ignoring or moving past it, prohibiting it from stepping out of the realm of private conversation into the public realm so it can be discussed and reconciled. For many, the subject is viscerally locked in shame and fear, anger and bitterness, adding to the difficulty of speaking out.” And yet, The Language of Remembering is not about grudges. Unlike perhaps the best-known tradition of score literature, violence is not the leitmotif of Malhotra’s narrative.

Instead, her skills as an interviewer inspire many of her respondents to dig deeper within themselves. Belonging, she writes, conveying the sentiments of her respondents, “may not be a physical space but a meaning that we carry in our bodies and pass on to generations.” It goes further than the name of a place or ‘a stamp on the passport. It is as deep as the ground of the Earth”.

In his previous book, Remnants of Separation, Malhotra brought the memory of the Partition to life through objects such as jewelry, utensils, books, and even intangible artifacts such as ways of speaking.

But belonging is also something imposed by Partition. Torn from their homes and livelihoods, the refugees, including Malhotra’s grandparents, had to rebuild their lives from scratch. There was no time to mourn what they had left behind. Partition remained engraved in the memories not as a wound as it is commonly described but “more like a scar, indelible, always present”.

But it is not that the respondents of Malhotra avoid talking about violence. One, for example, recounts being haunted by a bloodstained account book, the family’s only physical remnant from the pre-Partition era. Her family still observes August 14 as a day of mourning. As Malhotra writes, “the very word ‘Partition’ has become a feeling, an experience, a the storya memory, a burden, a wound, a war, all at once”.

It is this ability to create a layered narrative that is Malhotra’s strength. In 24 chapters with evocative titles, it lets the experiences of its respondents speak for themselves and details how the momentous event has become part of the collective memory.

In the final part of his book, Malhotra discusses the government’s decision to observe August 14 as a day of remembrance for the horrors of partition. Such a memory cannot be one-sided, she rightly says. “It cannot apply exclusively to Indians and must extend beyond our borders, potentially paving the way for cross-border conversations and progressive reconciliation.” And commemoration should not only be about community horror or violence, but should also look “both outward to our community and inward to our families in order to understand the grief, the trauma generational and the tendency to division”.

If there’s one overarching message in Language of Remembering, it’s that of empathy – a quality she also brings to her writing. It is a tale of the human bonds and relationships that once existed between communities. It reminded me of grandmother’s stories about Muslim neighbors who participated in Durga Puja and the baithaks in which his lawyer father-in-law received his clients and colleagues, Hindus and Muslims. With a smirk, Grandma often concluded that there would be separate utensils for Muslims.

Malhotra hopes efforts like his will inspire peace and reconciliation. It should, as she says in another place, also lead to a reflection on how wrong we have been even at times when we have made connections and forged relationships.