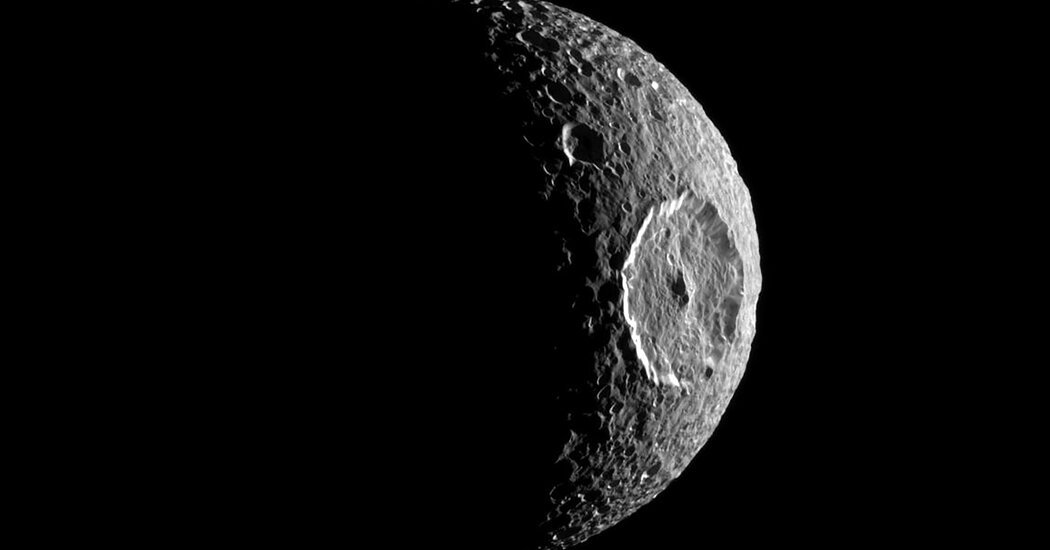 An ocean could be hiding inside Saturn’s Death Star

It’s a moon… and a scoop of waterlogged ice cream?

With a large crater carved into its surface, Saturn’s 250-mile-wide moon Mimas looks more like the Death Star in “Star Wars.” (When the Millennium Falcon first encounters the Death Star, Obi-Wan Kenobi grimly says, “It’s not a moon. It’s a space station.”)

For eight years, scientists have believed that Mimas, seemingly a pockmarked, frozen ball of ice, may be hiding a secret: a flowing ocean 14 to 20 miles below the surface.

In recent years, these oceanic worlds — Jupiter’s Europa and Saturn’s Enceladus, to name just two — have moved to the top of the list for scientists considering places in the solar system where life might have originated. A NASA spacecraft, Juno, will pass Europa for closer examination this year and another mission, Europa Clipper, is due to arrive for a dedicated mission there in 2030.

But unlike other icy moons known to have oceans beneath the ice, Mimas has a surface that shows no evidence of cracks or melting that might suggest slippage inside. It also pushed scientific credulity to believe that the interior of a moon as small as Mimas might be hot enough for an ocean to remain unfrozen.

A planetary scientist who thought the idea of ​​a Mimas Ocean was unlikely now finds thermodynamics plausible.

“I changed my mind fairly recently,” said Alyssa Rhoden, a specialist in icy moon geophysics at the Southwest Research Institute in Boulder, Colorado. “I was saying Mimas can’t have an ocean, but what I was really saying was, for Mimas to have an ocean would really challenge our intuition about Mimas. And when I realized that, I thought, well, that’s not how scientists are supposed to work. We don’t come to a conclusion without actually testing the hypothesis.

Dr. Rhoden, along with Matthew Walker of the Planetary Science Institute, headquartered in Tucson, Arizona, designed a computer simulation to explore the tidal forces of Saturn and Mimas. They found that the heat generated by the tides, which would squeeze the moon, could be enough to sustain the hypothetical ocean.

One of the keys to explaining the lack of fissures is that the ocean, if it exists, was formed relatively recently. It can also be stable in size or grow in size. When water freezes into ice, its volume increases and the upward pressure would fracture the ice above.

“The ice shell cannot thicken today,” Dr Rhoden said. “So Mimas either needs to warm up or be stable.”

The suggestion of a Mimas Ocean comes from measurements by NASA’s Cassini spacecraft, which orbited Saturn from 2004 to 2017. Mimas’ orbit is tidally locked with Saturn: the same side of the moon always faces to the ringed planet, just as we on Earth see only one side of Earth’s moon. But in 2014, scientists reported a larger-than-expected wobble in Mimas’ rotation. This suggested that either Mimas’ core was stretched in the direction of Saturn, or there was an ocean.

“Even though we suggested this, the ocean as a possibility, I personally started to lose hope that there could actually be an ocean,” said Radwan Tajeddine, lead author of the 2014 paper, published in the journal Science. “What’s amazing about this paper is that it actually shows that if you just use reasonable ice properties and apply a more sophisticated model, you can actually have an ocean in it and survive.”

William McKinnon, a professor of earth and planetary sciences at Washington University in St. Louis, remains skeptical. “My short answer is that it’s hard to believe,” he said in an email. “There is nothing on the surface of Mimas that indicates ‘ocean’ or ‘high heat flux’, unlike Enceladus.”

The other possibility – a stretched solid interior – also remains plausible. Answers may have to wait for a future robotic probe to Saturn that could make more detailed measurements of Mimas.

“It’s another piece of the puzzle,” said Dr Tajeddine. “This article says an ocean is not a crazy idea.”