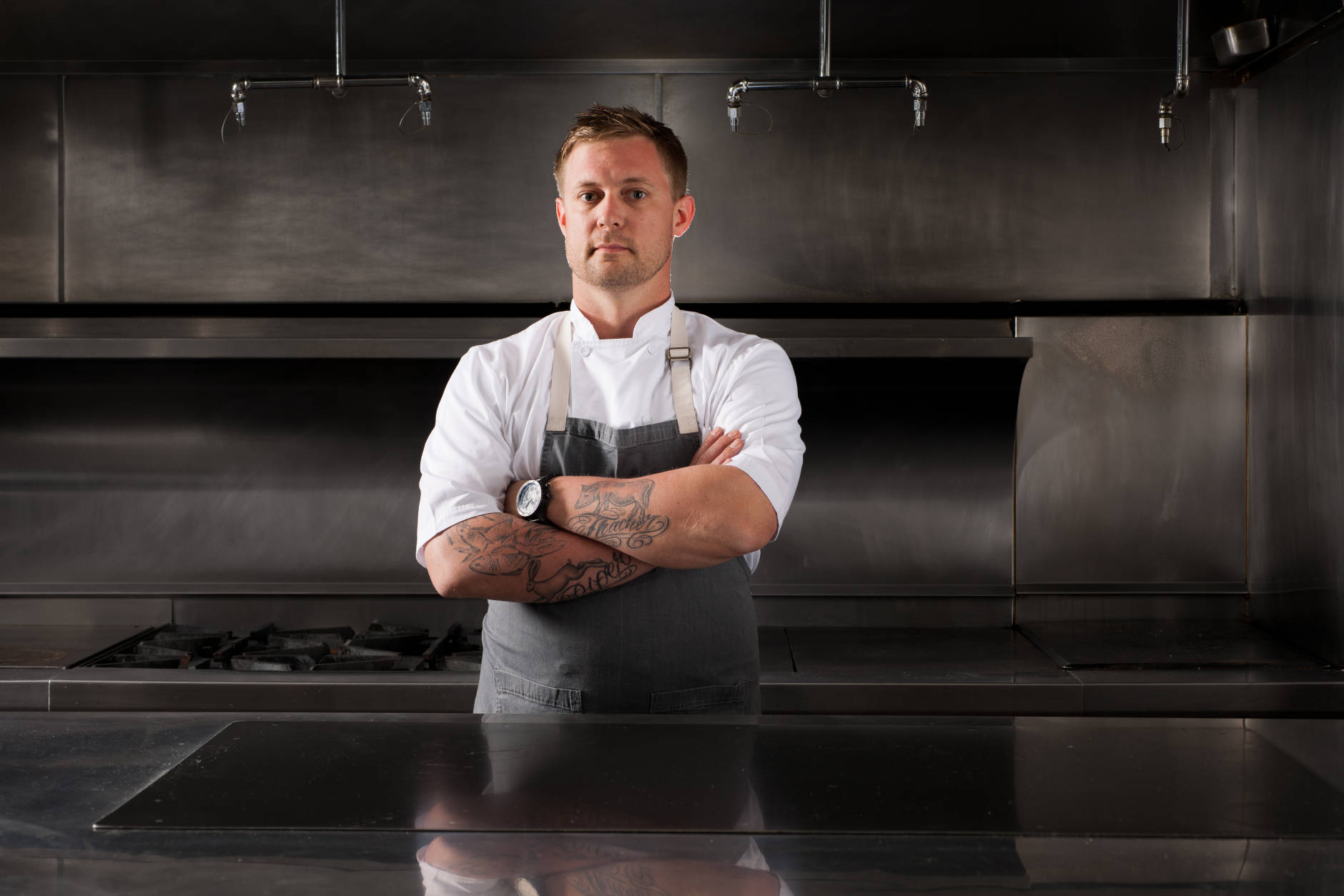 He is arguably Maryland’s most famous local chef, from Volt to Frederick to Voltaggio Brothers Steakhouse at MGM National Harbor in Oxon Hill.

This week, Bryan Voltaggio is busy running his restaurant business amid coronavirus shutdowns, while appearing on “Top Chef: All-Stars LA” this Thursday night on Bravo.

“This season is everyone who has come a long way in a competition [over] the majority of the last 16 seasons,” Voltaggio told WTOP. “They are finalists in their season or have reached the final, some of them have at least passed Restaurant Wars.”

This is Voltaggio’s third time on the program after losing to his brother, Michael, in the season six finale of “Top Chef: Las Vegas” in 2009.

“Everybody likes to remind me,” Voltaggio joked. “It’s fantastic.”

“I’ve been second about twice so it was time to come back a third time and see if I can win this time,” Voltaggio said.

This season, he takes on two of his former season six rivals, Kevin Gillespie and Jennifer Carroll, who have DC ties to contestant Eric Adjepong.

“Kevin is a great cook and also a good friend,” Voltaggio said. “We are all colleagues and friends now. … Those friendships are put aside for now while we all compete during challenges, and yet high fives afterwards, so it’s a very unique situation to go back and compete against people you know.

This season, Voltaggio survived Episode 1 after a “establishment” quick challenge, which he calls a classic judge Tom Colicchio favorite.

“There are three different challenges…turning the artichokes, segmenting the oranges, and the last one was cracking the almonds,” Voltaggio said. “I managed to pass the artichokes, so I was among the first group to return to the kitchen of ‘Top Chef’. … We made a roast artichoke dish with selected yogurt and sumac, then we also made an artichoke tortellini with brodo.

His team won the rapid-fire challenge before taking part in the elimination challenge with open-air barbecue cooking and a seafood spread.

“We did this by the ocean on the beach and served an amazing table of chefs including Nancy Silverton, Jeremiah Tower and obviously Gail [Simmons]padma [Lakshmi], Tom Colicchio and Marcus Samuelsson,” Voltaggio said. “We didn’t win the challenge, but I didn’t make it home, so here I am.”

Episode 2 saw Voltaggio scour Los Angeles to sample the “101 Best Restaurants” of Pulitzer Prize-winning food critic Jonathan Gold, who died in 2018. The chefs then created dishes to serve to 200 guests at Union Station, including the manager of “Chef” Jon Favreau. .

“That’s what I really love about ‘Top Chef’, it’s the competition,” Voltaggio said.

He’s come a long way since growing up in Frederick, where he was born in 1976.

“We always had dinner at 5:30 no matter what,” Voltaggio said. “Sports, crazy schedules, a family of three children, [my mother] always ensured that we had meals from scratch. … We had a back garden, so the exposure to food that meant a lot to us interested me.

While attending Thomas Johnson High School, he got his first taste of catering as a server at the Francis Scott Key Holiday Inn.

“I didn’t really like cleaning the plates,” Voltaggio said. “I saw fire and knives and madness in the kitchen, so I asked a chef, ‘Look, if I was in that vocational program in high school, would you let me cook?’ He said ‘yes’ and that’s how I got my chance. I started at 15.”

After studying at the Culinary Institute of America, he lived in New York for seven years; working for celebrity chef Charlie Palmer. He returned to DC to open Charlie Palmer Steak on Capitol Hill, before eventually returning to Frederick to open Volt.

“I always knew I was going to come home and open this restaurant,” Voltaggio said. “I actually did a project at the Culinary Institute of America where you built a restaurant out of paper and it was a restaurant in an old brownstone in downtown Frederick.”

A decade later, in 2008, Volt spearheaded a restaurant revival in downtown Frederick.

“When I decided to open this restaurant 12 years ago, there was great food in Frederick, but the experience we brought to Volt was like something we hadn’t seen in this region,” he said. “It was the first restaurant I opened. It’s my flagship, my baby.

He expanded his reach across the wider DC region by opening Voltaggio Brothers Steakhouse at MGM National Harbor and Estuary at the Conrad Hotel in CityCenterDC.

“Both of these projects are collaborations between my brother and me,” Voltaggio said. “Even though there are times when there is some rivalry, we put that aside and now we are working on new projects together, which has been extremely exciting.”

Both of these projects are currently closed due to coronavirus, as is Volt at Frederick.

“Life has definitely changed,” Voltaggio said. “Volt is temporarily closed at this time. …It’s more of an in-restaurant experience for our diners, so we decided it would make more sense to do that and channel our efforts into our other restaurant, Family Meal. Here we are doing a take-out operation 4-8 [p.m.] every day with even now cocktails to go.”

“You see 20% of your typical earnings,” Voltaggio said. “That’s exactly what we need to do to try to keep some people employed and also for the community. … We try to maintain some normality in their lives, although we obviously respect the dangers of what is around us, respect the virus and ensure that everyone stays safe.

His charity work with the non-profit group No Kid Hungry is also helpful right now.

“There are a lot of people who are out of school,” Voltaggio said. “No Kid Hungry connects kids to meals and fills the gaps, especially during the summer. I’ve been fortunate to work with them for years and raise funds that impact people right here in the county of Frederick, but also in the surrounding DC metro area.

Ultimately, if Voltaggio only had one meal to eat, what would it be?

“I love cooking outdoors,” Voltaggio said. “Spring barbecue is great. I am also a big fan of Japanese cuisines and sushi. … But I think a good home-cooked meal with my family is what I really enjoy. I’m at the restaurant every day and sometimes what I cook at home is very different from what I cook at the restaurant. It’s a little more comforting. »