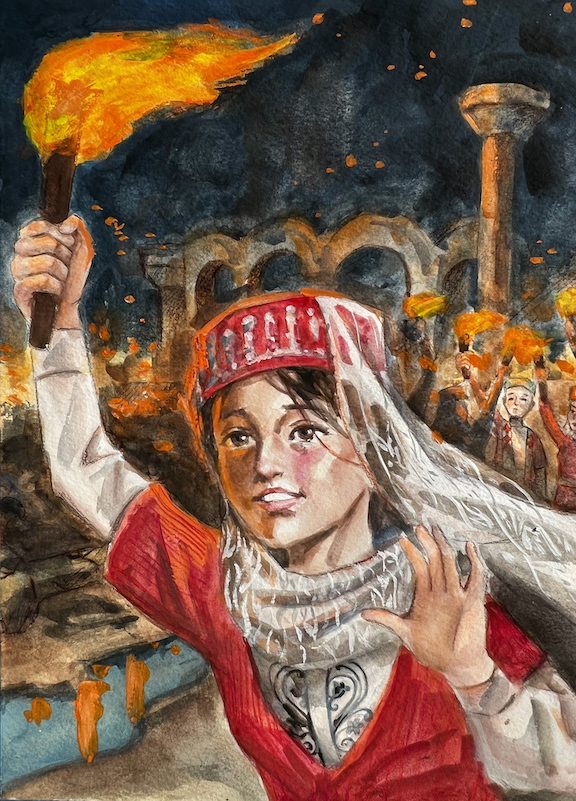 The California Armenian Legislative Caucus Foundation worked hard this year to advocate and participate in educational and governmental efforts in California and awarded 6 scholarships to California high school students who entered essay and art contests.

“Year after year, I have had the pleasure of seeing how this scholarship competition has both raised awareness of the Armenian Genocide and given young minds knowledge for a lifetime,” said Assemblyman Adrin Nazarian ( D-Sherman Oaks). “Genocides, like the 1915 Armenian Genocide, must be recognized so that future genocides can be prevented.”

“Today, our Scholars leave more empowered to recognize and address future crimes against humanity and I am proud that the Caucus Foundation has helped develop these skills in these young Californians,” the member added. Nazarian Assembly. “I hope the Caucus Foundation will continue to commit to this fellowship, as it has been one of my main goals as a founding member.”

“Congratulations to all of the scholarship recipients for this great achievement,” said Assemblyman Mike Fong (D-Alhambra). “The students’ essays and artwork are a reminder of the rich cultural history of Armenian Americans throughout California, as well as the importance of ensuring that Armenian Americans have a place at the decision-making table.”

“My district includes Montebello, a town with a large Armenian population that is home to the Montebello Genocide Memorial,” Assemblyman Fong added. “I understand why it’s so important that we remember the atrocities they faced so that we can be inspired by and build on their resilience.”

“Congratulations to the extremely talented scholarship recipients and thank you to everyone who took the time to delve and go further in exploring the ‘Human Interaction’ theme,” the member said. Assembly Laura Friedman (D-Glendale). “It is such a privilege and inspiration to experience the magnificent artwork and essays of the next generation of Armenian American voices and leaders.”

“As we remember the Armenian Genocide, today we pledge to fight the systematic injustice and inequality of governments around the world, and we join your cause to stop future genocides,” the member noted. of Assembly Chris Holden (D-Pasadena). “Congratulations to the deserving students selected for this scholarship.”

“Hats off to the winners! These students deserve recognition for using their talents to showcase history through words and the visual arts,” said Senate Republican Leader Scott Wilk (R-Santa Clarita “The California Armenian Caucus Foundation Scholarship Program is my favorite and I’m glad students see it as a golden opportunity to earn funding to help them with their higher education while experiencing some of the brightest days. darkest in history.”

“Congratulations to these outstanding California students for their deep commitment to preserving and sharing the rich history of Armenian Americans,” said Senate Majority Leader Emeritus Bob Hertzberg (D-Van Nuys). “Love for the Armenian people and their culture begins with teaching the next generation in our schools and museums. Our annual caucus essay contest is a vital tool in fostering this vital education across our state. »

Earlier this year, the California Armenian Legislative Caucus Foundation invited California high school students to participate in its annual essay contest. The students were asked to write a note to the Armenian American National Museum sharing with the museum director the name of a person who should be featured in the wing of the museum titled “Notable Armenian Americans.”

Winners of the annual essay contest include:

Winners of the Visual Arts Scholarship include: