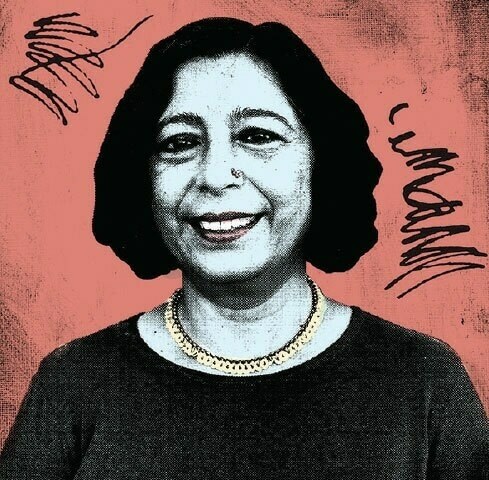 A long time ago – perhaps in the 1970s – I observed my father, Shamsur Rahman Faruqi, leafing through dictionaries, looking for rare bird names. He was working on the translation of a shahr ashob by Mirza Qalandar Bakhsh Jurat, the mid-eighteenth-century Urdu poet best remembered for his romantic, racy ghazals and masnavis brimming with puns and explicit innuendo.

A shahr ashob is a poem lamenting the decline of cities and the sophisticated culture they nurtured. How could a poet fill a shahr ashob with birds, I asked. My father explained that Jurat’s poem expresses cultural decline through the metaphor of birds.

The bulbul, the meek garden dweller who sings, is pitted against a host of raucous birds, each claiming to be better than the bulbul. The metaphor of the birds and their voices gives a double unity to the poem, suggesting a universal chaos born of sound. My father read me some stanzas he had translated:

Countryside thugs are now writing verses in Urdu – at least they try
Carpenters are now artists – as soon as their pictures dry
In short, it seems that injustice is now going from bad to worse
The plucked-feathered shyama, born to be perverse
Try to make his voice prevail
In the presence of the nightingale

Jurat’s shahr ashob has 23 stanzas of five lines each, in a rhyming pattern called mukhammas; the fifth line is always the same, and the repetition helps to hammer home the theme of the poem. I counted 35 birds, from common sparrow, raven and koel to painted quail, waxwing and blue jay.

In the poetics of the ghazal universe, the garden presents both the macrocosm and the microcosm of life on earth. The great theme is the binary of existence and non-existence, being and non-being, life and death. The garden is the space where life and death unfold. The change of seasons from bahaar/spring to khizaan/autumn speaks of color and fading, birth and death, but regeneration follows — renewal of life.

The inhabitants of the garden, mainly the gul/rose and the bulbul, signify the loving/beloved relationship. Beauty is fleeting, but love is eternal. There are many inhabitants in the garden. There is the dove, which is a messenger of peace; and the peacock, which represents the iridescence of nature’s beauty and color. The graceful gazelle inhabits wild gardens and meadows.

A basic idea is the contrast between the garden (shaman) and the wild nature or the desert (sehra). But bad guys lurk in the garden: the shikaari [hunter], also known as saiyyad, spreads a net to trap birds, cages them and sells them. Songbirds in golden cages sing of the pain of separation.

Among the Indian birds, the peacock has most fascinated our poets. No bird could have carried the weight of a magnificent train of iridescent patterned plumage and an overload of mythos, but the peacock. The brilliant plumage of the peacock inspired Ghalib to illustrate his favorite nairang theme.

Nairang has a multitude of meanings – fascination, bewitchment, deception, illusion, wonder. Ghalib was playing with illusion and deception as the peacock’s shimmering plumage could accommodate the verbal game of hide-and-seek he relished. He imagined the green-blue colors of the peacock hiding, even merging, with the wild, green and grassy meadows.

More attractive than the peacock is the bulbul, the emblematic bird of poetry. Ghazal’s critics often choose the “exaggerated and unrealistic passion” symbolized by the gul-o-bulbul to label her as “foreign”. It’s a Persian image they say, not indigenous to the subcontinent.

Yet the image was so persistent that most people do not remember the bulbul’s old name. The most common name was kalsiri, meaning black-headed. Native species belong to the family of short-legged thrushes. In the John T. Platt Dictionary, the Indian bulbul (Lanius boulboul) is suggested to be closer to the swallow-tailed shrike.

However, there is a difference between the bulbul bird and its literary equivalent, which is the bulbul that lives in the garden of classical ghazal poetry. In mystical poetry, the bulbul’s longing for the rose serves as a metaphor for the soul’s longing for union with God.

Trust Mirza Ghalib to find one of the most poignant verses of the bulbul song:

[Who can call the bulbul’s lament wasted?
In the guise of the rose, a million hearts were sundered]

Moving on to more everyday images of birds in Urdu poetry, Jurat’s younger contemporary, Nazir Akbarabadi, was known to be a poet of the people, or a poet of the bazaar, as he wrote poems about the activities of daily life .

Nazir’s divan contains a rich store of poems about birds. My favorite is the one on kabootar baazi [sporting pigeons]. According to Nazir, pigeons are the most remarkable – sarfaraz – among all birds:

[What is the bulbul, the dove, the robin, big or small?

The crested lark, the small lark, finch, weaverbird, pied mynah or parrot/ What of the songbird and mynah and partridge and the shrike?

All the sporting birds that you can like
The most outstanding is the pigeon
There are Basri and Kabuli, Shirazi and Nisavar
Chuya Chandan and Sabz Mukhi, Shastar and Akkar
Taoosi and Gul Potiye, Niley, Gulli. And Thaiyyar
Even stars don’t have that style in the skies’ canopy
That pigeons display when they perch on their canopy]

“Chirryon Ki Tasbeeh” by Nazir [A Rosary of Birds] surpasses Jurat’s bird lists. This poem engages with the song of birds, building on the belief that birds sing the praises of God.

There is a wealth of cultural memories embedded in the poetry. There is a whole lexicon of bird names that should be cataloged and associated with bird paintings.

The columnist is an associate professor in the Department of Middle Eastern and South Asian Languages ​​and Cultures at the University of Virginia.