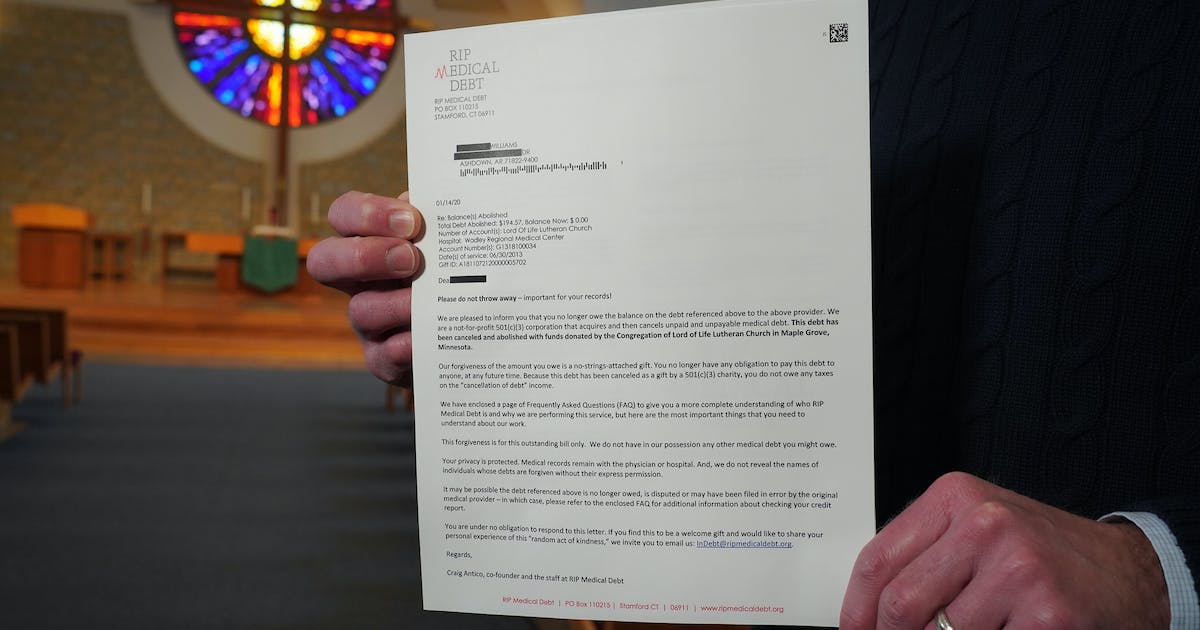 The surprise letters landed in the mailboxes of 472 low-income residents of Texas and Arkansas last month, all of whom were struggling with medical bills.

After a short introduction, the letter explained: “This [medical] the debt was canceled and abolished with funds donated by the Congregation of Lord of Life Lutheran Church in Maple Grove Minnesota.

Wiping out those health care debts has become the latest mission of Lord of Life, which is the first church in the state to partner with an unusual New York-based nonprofit called RIP Medical Debt. The organization wholesale purchases unpaid medical debt at pennies on the dollar, then directs charitable donations to pay the medical bills of those in need.

The modest $15,000 donated by Lord of Life Church paid off more than $1 million in debt, Reverend Joel Wight Hoogheem said. The average debt erased was about $3,000, he said.

Wight Hoogheem said he has long been aware of the stress faced by people who have medical bills they simply cannot pay. It is not uncommon for them to reach out to their religious communities, often with a sense of shame.

“We will receive requests for assistance both at [my] church and other churches that I have served that have Good Samaritan funds,” Wight Hoogheem said. “I’ve seen families who have to make a choice: do we pay for Xcel? [Energy] this month or the medical bill? And there are ramifications of both.

Additionally, studies have shown that about two out of three people filing for personal bankruptcy cite medical expenses as the primary cause, Wight Hoogheem said.

“It’s a cloud that still hangs over people’s lives,” he said.

The idea to join RIP Medical Debt came from Skip Lieser, a church member and retired senior finance executive for a large Minnesota corporation. Lieser said he heard about the organization on the radio last fall and decided to check it out.

“My antenna got up at the start,” Lieser said. “How can they do so much with so little [money]?”

Lieser went online and checked the financial audit posted on the RIP Medical Debt website. He called several churches who donated. He learned that the Minnesota Nurses Association had been donating to RIP Medical Debt for several years, so he called someone there as well.

Satisfied that the program was strong, Lieser suggested to Wight Hoogheem that the church donate funds. Lord of Life took $15,000 from his charitable gift fund and sent him away.

The money was distributed last month to people primarily in two counties in Texas and one in Arkansas, where more than 400 residents received letters in the mail with an unexpected surprise. RIP Medical Debt works primarily in the Appalachian region and in seven southern or western states where the medical safety net is sometimes frayed.

The nonprofit is not helping Minnesotans at this time, Wight Hoogheem said, because it’s still unclear whether their work conflicts with state consumer protection laws.

The nonprofit organization wholesale purchases unpaid debt from medical debt buyers who typically collect 2-5% of the debt they hold, Antico said. RIP Medical Debt gets rid of it, but for less than 1% of the debt.

Lieser, who has been involved in charity work in the Twin Cities for years, said getting involved in debt cancellation “sounds like something we should be doing.”

“The problem with medical debt is that it’s not something people choose,” Lieser said. “People don’t choose to have a car accident or cancer.”

According to a 2015 survey by the Kaiser Family Foundation, one in four Americans said they or a family member had difficulty paying their medical bills in the past year. The figure jumped to 37% for those earning less than $50,000 a year. Six in 10 had insurance when the debt started.

Lord of Life is expected to launch a larger fundraising campaign for RIP Medical Debt next year, Wight Hoogheem said. The church would ideally like to help Minnesotans in debt, but until that’s resolved, they’re thrilled that relatively small donations can do so much good.

“I was skeptical too,” Wight Hoogheem said. “But according to all the evidence we have, it is actually happening.”

GTT announces a change in the management team