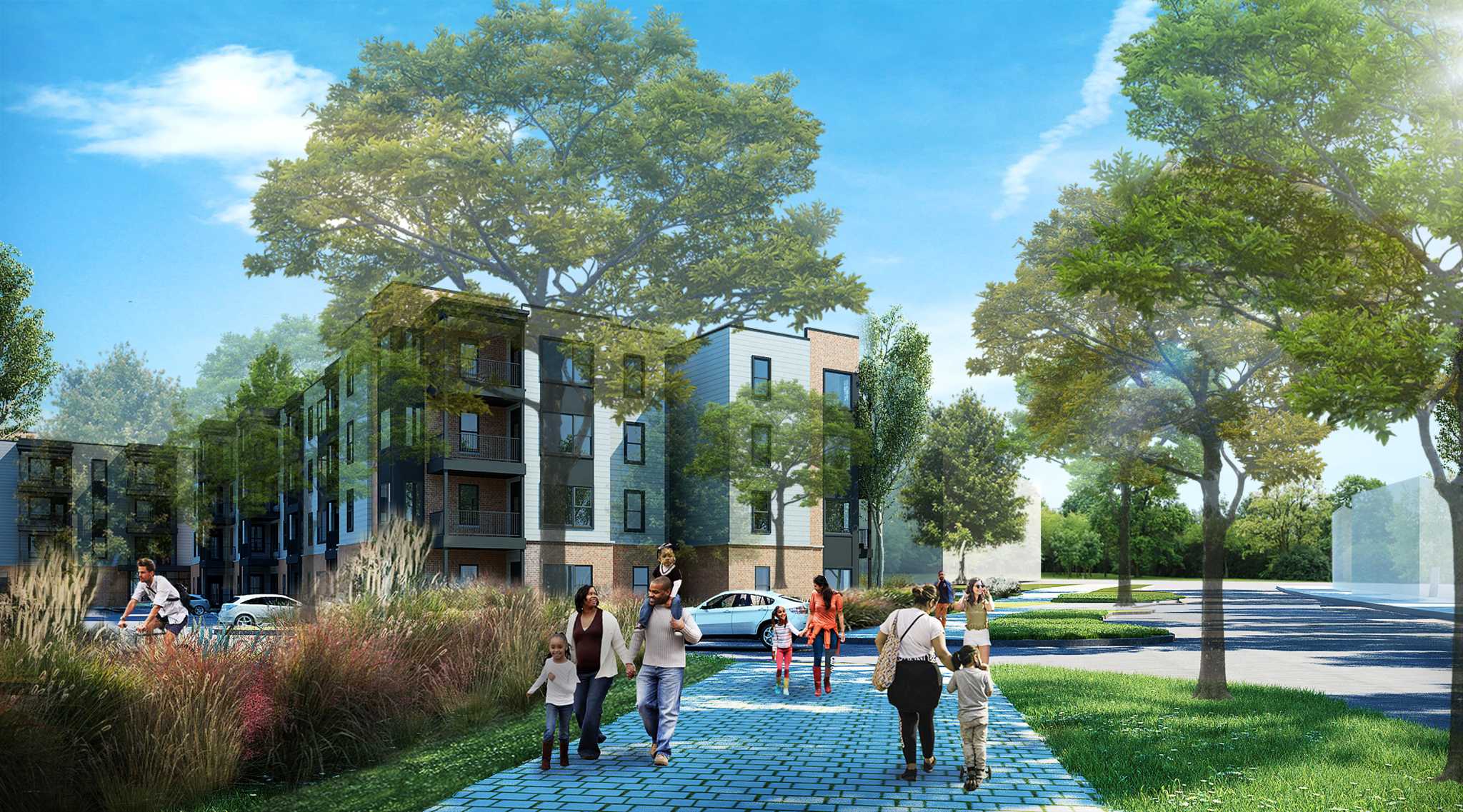 Houstonians should thank the Buffalo Bayou Partnership, the Kinder Foundation

It really is a pretty park, with features that tick all the standard boxes: a playground, a gazebo with a large table, a soccer field, restrooms and water fountains, a paved path that winds through through the property and lots of old green space. However, on a recent weekday afternoon, a visit to Tony Marron Park in Houston’s East End revealed some issues. The water fountains worked well, but the toilets were locked. It took me a while to find a spot that had a view of Buffalo Bayou, just north of the park. And on the best day in Houston since spring long ago, the only visitors besides me were a dozen employees and volunteers from the Texas Organizing Project, huddled in the shade of the gazebo as they prepared for an afternoon walk.

Less than a mile away, a rusting shipping container at the edge of an empty parking lot marked the location of Japhet Creek, a tributary of the bayou barely visible through the trees. As I snooped around the site, a stray dog ​​was my only companion until a young man showed up and started walking along a rough path that follows the stream.

The Merry Band of Houston Bayou Improvement Defenders envision bigger and better things for Tony Marron Park, Japhet Creek and many other places along the bayou east of downtown. Marron Park was the site of a Sept. 26 press conference announcing a $100 million donation from the Kinder Foundation to help fund a master plan for parks along Buffalo Bayou in the East End and Fifth Ward neighborhoods. .

As the Chronicle’s Diane Cowen reported, the donation from philanthropists Nancy and Rich Kinder will serve as a catalyst for additional funds from the City of Houston, Harris County, federal housing tax credits and future fundraising. of funds by the Buffalo Bayou Partnership, which in 2019 released the master plan that brings together the work of many leading landscape architecture firms. One of the first planned projects, with work to begin early next year, is to create a pocket park at Japhet Creek, later connected to an expanded Tony Marron Park by a pedestrian bridge, Cowen reported.

While reading the article about the Kinders gift, I remembered a article I wrote for the Chronicle It was almost exactly 20 years ago on September 22, 2002 when the bayou partnership released a master plan titled “Buffalo Bayou and Beyond”. The 191-page document called for dozens of improvement projects along the bayou, from Shepherd Drive to the Ships Channel Turning Basin, with an additional goal of encouraging private development in adjacent neighborhoods. “All over the world, major cities are reinventing themselves around their waterfronts,” reads a preview of the plan. “Think of New York Harbor, Chicago Lakeside, Baltimore Inner Harbor, San Francisco Bay, Barcelona Waterfront, Paris Seine River and London. South Shore and the Docklands.

When my editor read these words — the Seine? San Francisco Bay? Oh good? — his eyes rolled, figuratively if not literally. She said my story should be more skeptical. I pointed out that I wasn’t reporting this as a done deal, only as a plan, but she wasn’t completely appeased. Today, of course, the Award-winning Buffalo Bayou Park in its western sector of Shepherd downtown shows that the plan was more than a pipe dream. The park, which was largely designed to withstand flooding, was tested by a series of floods during construction and then by Hurricane Harvey; its resilience and innovative design impressed judges from the Urban Land Institute and earned the park a win at the 2017-2018 Global Awards for Excellence. Even that realization, however, only moved rather than silenced skepticism: Sure, they built a nice park on the side of town where more affluent, mostly white people live, but what about he of those who live outside the “Houston Arrow,” who my colleague Leah Binkovitz described it so well.

The Kinder Foundation donation is a welcome response to the inequalities Binkovitz documented that have persisted since Houston leaders began to understand that “quality of life” features like parks and trails are vital parts of any city. who aspires to greatness. The Shepherd’s Segment in downtown Buffalo Bayou Park is bustling with activity almost every day — spandex-clad cyclists pass mothers pushing strollers, couples lounging in the grass alongside a band playing volleyball, a family spreads a blanket for a picnic in the shade of stately oak trees a stone’s throw from the bayou. Residents of the predominantly black and Hispanic neighborhoods along the eastern segment of the bayou deserve the same activities, the same joy. The donation from Kinders, who have also made generous donations to other major parks projects in Houston, shows that some of the city’s most influential citizens recognize this inequity and are committed to correcting it.

The many users and admirers of the existing Buffalo Bayou Park should not expect a carbon copy east of downtown. Adjacent neighborhoods have different populations with different cultures, and improvements to the east are intended to reflect this, based on feedback gathered from area residents during planning. “We’re not going to take Buffalo Bayou Park and dump it in the East End,” Anne Olson, president of the Buffalo Bayou Partnership, told me. For example, the eastern segment won’t have a dog park — an extremely popular feature of the current park — because most people who attended community meetings said they didn’t want one.

Perhaps the greatest current skepticism is not whether the park will attract people or investment will go to black and Hispanic neighborhoods, but whether it will accelerate gentrification. Will the very people who have long been outside of “the spire” be displaced as their parks and other amenities improve?

Importantly, the first project under this initiative is not a park: it is an affordable housing development. The project will begin with 80 multi-family units, developed with federal tax credits in a joint venture between the Buffalo Bayou Partnership and Chicago-based development company Brinshore, Olson said. It will be held at the intersection of the bayou with Lockwood.

The fact that this project has received such a priority shows an acknowledgment of the risk that emerges when quality public spaces are developed in working-class neighbourhoods. The concern is that these projects will make neighborhoods more attractive, increase property values ​​and therefore raise taxes, pushing away people who cannot afford the higher levies. It seems preposterous to argue that high-quality parks should be denied to neighborhoods that need them, but the concern is not unfounded. In Manhattan, the conversion of abandoned runways into High Line park initially generated a kind of euphoria that turned to bitterness as longtime residents and businesses were driven from adjacent neighborhoods. Acknowledging their mistakes, High Line leaders set up a network of major infrastructure reuse projects across the country, including Buffalo Bayou Park, to share lessons about integrating affordability and equity. in the plans from the start.

Yet there is only so far a park plan can go. The long-term answer is a fairer state tax structure and greater income equality, but in the meantime, it’s encouraging to see efforts like this housing estate that attempt to address the problem, however incompletely. As Olson told me, “We can’t solve all the problems in the world.”

Maybe not, but the Buffalo Bayou Partnership, the Kinder Foundation and others involved in this initiative deserve the thanks of all Houstonians, not just those in adjacent neighborhoods. A bigger, better, fairer park system makes for a better city, which gives us all bragging rights. Even the skeptics.

Mike Snyder is a writer from Houston who retired from the Chronicle in 2019 after 40 years as a reporter, editor and columnist.