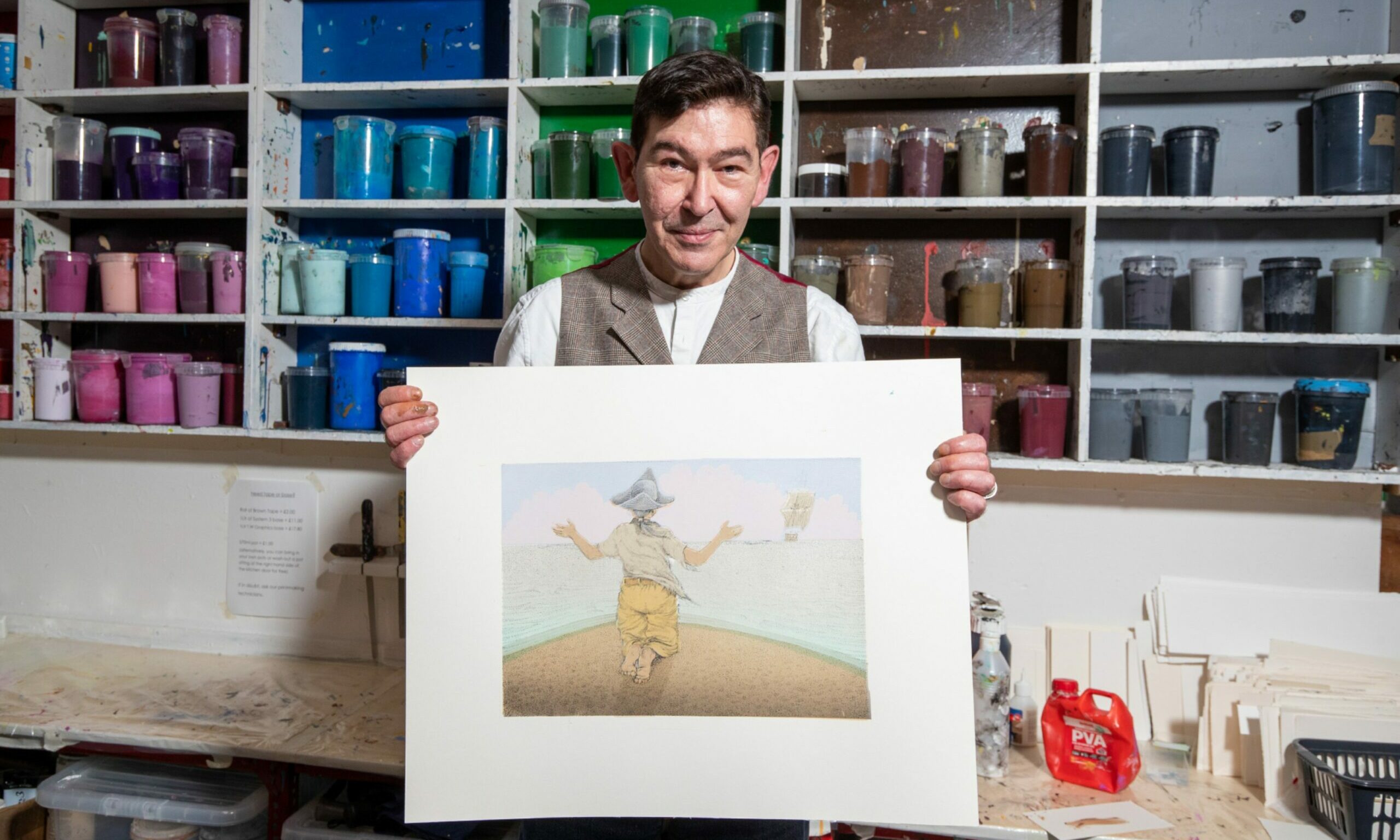 It has been a long and winding road since Charlie Hynes launched his artistic career at the start of Beatlemania.

Born at Uphall Station in West Lothian, the youngster was first encouraged by his grandfather, George Murphy, to draw with chalk on tiles and quickly became fascinated with the process of bringing pictures to life. .

There was little money in the family’s coffers and Charlie ended up working at the Coop in Pumpherston, the same mining community where his mother regularly served dinners to hungry customers at the local chip shop.

But ever since he came across a former “wise and wonderful” teacher, Hugh Tuckerman, who persuaded him to return to St Mary’s in Bathgate for secret art lessons, this innovative character has transformed oil and l water in gold or in whiskey through a diverse range of commissions.

He lived in Aberdeen for many years and spent over a decade as an engraver at Peacock Visual Arts in the city, where we met him in a typically bubbling manner as he spoke about his past, present projects. and future.

Charlie was only five when he won first prize from a British National School for Painting and, although he marveled at the gigantic shale bings surrounding him – “I felt like to be on Mars and it was exciting “- he began to exhibit the gifts that would eventually bring him to the attention of the Royal Scottish Academy and earn him many honors.

Initially, he never had the illusion of embarking on an art university or college, let alone receiving a grant or scholarship, but he had the commitment and ethics. tireless work necessary to continue to develop its repertoire and build a substantial portfolio.

This meant that there hadn’t been overnight success, but gradually, inexorably, he went from being a warehouse worker at a self-service store in Pumpherston to becoming a respected artist for de major whiskey brands and an illustrator for several authors, including the “Queen of Doric”, Sheena Blackhall.

He told me, “The seeds were first sown by my grandfather and I loved every aspect of the art, which has helped me in class and beyond.

“In high school I got an A in Higher Arts, but I left at 16 to work in the Krazy Kuts warehouse, unloading trucks and stuck at the store.

“I was still a working-class teenager in the early 1970s and had no big plans, but when Hugh suggested to my mother that I should go back to school, I quickly realized it was the best thing I could have done.

Sometimes you are speechless, but people love their drams.

“I did not have the necessary qualifications, but eventually, with the invaluable help of Hugh, my portfolio was accepted by Gray’s School of Art, which led me to move to the northeast where I have lived ever since. .

“It’s fascinating to work in different mediums and I exhibited my first sculpture at RSA – a boxed construction by Moby Dick – and, again, although I didn’t consider myself a sculptor, she won the first price.

“Hugh was an integral part of my early successes – he was an intuitive man, a gem of a man who taught me to be myself and always trust my instincts.

“I guess these days I’m a bit of a dinosaur (not relying on computers and online gadgets) but I like to experiment with different materials and sometimes you can make a new or unusual impact with things. surprising.

“For example, in describing the ripples and changing patterns of the sea, I mixed iridescent ink with children’s glitter and it had the desired effect.

“This urge to experiment means that there are always surprises to be found in the studio.

“And my wife (Maria Antoinette Morales Hynes) is my shining light and she always encourages and supports me in my art.”

There is no more compelling example of how Charlie has moved in different circles since the start of his career in West Lothian than his work with Glenfarclas, with whom he collaborated on their 40 Year Old Scottish Classic, than the company has described it as “a celebration of the third millennium”.

These distinctive bottles of the Scottish national drink were issued as a limited edition in early 2000, but even now some of the items are found in various auction rooms and one sold for £ 7,500 in London this month.

The range of 600 individually numbered bottles commemorates a triumvirate of great Scottish literary heroes, Sir Walter Scott, Robert Louis Stevenson and Robert “Rabbie” Burns, who have been honored in a series of works of art produced by three different artists.

Scotch and wry at this price!

Charlie said: “I have been tasked with paying homage to Stevenson’s books, Treasure Island and Kidnapped, and it was a great experience capturing some of the most famous scenes from these famous novels.

“There is an incredible craze for these limited edition bottles, especially when they are individually numbered, and it surprises me sometimes when I hear what some collectors are willing to pay for them.

I am happy to help anyone who would like advice.

“But then I remember talking to someone who worked at a luxury hotel in Scotland and they told me that a piece of this product was for sale at a cost… of £ 500.

“Sometimes you are speechless, but people love their drams.”

Charlie is always striving to enter new territories, to take on new challenges and he has designed prints of a character called Merman – who has nothing to do with the old American singer but is a striking sea creature who has sparked a backlash of approval from Peacock Visual Arts.

He’s in his element in this environment, and there’s a sparkle in his eyes as he recalls the lessons that served him so well all those years ago in towns as down to earth as Broxburn. , Pumpherston and Bathgate.

As someone who has thrived on the guidance and help of a mentor, Charlie is keen to encourage young people in the North East to pursue their own ambitions, even if they think art school or college is not for them.

He said: “I have seen so many talented people who didn’t have the chance to go to college that it taught me that you have to keep working on your own portfolio and demonstrate your abilities in so much. from different areas as possible.

“Everyone needs to be encouraged and encouraged at the start of their career and I am constantly delighted with the level of art that is produced not only here in Aberdeen but across Scotland.

“I am happy to help anyone who would like advice.

“Who knows what could have happened to me without Hugh Tuckerman all those years ago?” “

Charlie admits he struggled to understand the Doric dialect when he first arrived in the Granite City.

But in the years that followed, he reveled in everything from Union Street 2000 to Blackhall’s collection of poems Heilanman’s Sporran.

And who knows what he might be up to in the years to come?

Poetry, the Edgemere Diner and the Vernon Hotel