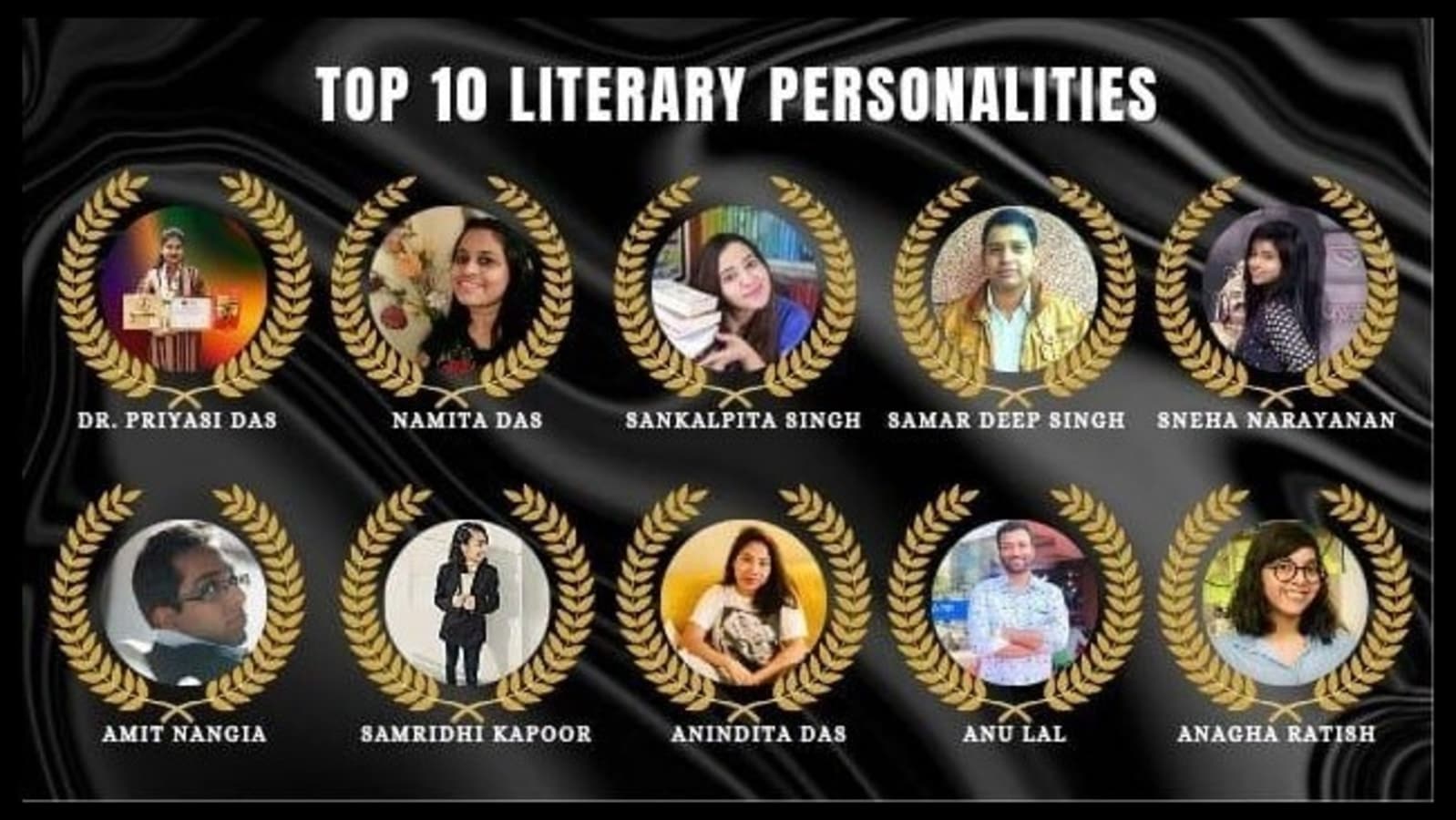 Dr Priyasi Das is from the city of Joy Kolkata. She is an award-winning author, engineer, editor, honorary doctorate in literature, holder of several records, Guinness World Record (holder of a mass attempt) and MISS E&E Universe (West Bengal). She is the author of 8 books and has written over 48 anthologies. Besides being an avid author, she is also a verified celebrity on “RIZZLE APP”. She completed her research and thesis in Literature and obtained her HONORARY DOCTORATE in Literature from GLOBAL TRIUMPH VIRTUAL UNIVERSITY. She has set several national and world records for being the first person to write a reality-based book on COVID-19. She has been awarded with INDIA BOOK OF RECORDS, VAJRA WORLD RECORDS, OMG BOOK OF RECORDS, GLOBAL RECORDS RESEARCH & FOUNDATION, MVLA GLOBAL ACHIEVERS AWARD, LAUREATE AWARD, CHERRY BOOK AWARDS and many others.

Sneha Narayanan’s first book of poetry, Amazon bestseller Bloom, has created waves in the literary world since its release this month and has proven to be a smash hit. Her poems explore the themes of self-acceptance, body positivity, and healing. Born into an army family and raised nationwide, Sneha quit her job at IBM in 2018. She went on to start a blog, which quickly won an award in the Best Personal Development category in 2019.

Around the start of 2020, Sneha started posting excerpts from her poems on Instagram. His articles and poems have since inspired many people, especially young girls with self-esteem issues. Not many people know this, but Sneha also has teaching experience, having taught at Aurora College (Hyderabad) for two years after completing her MBA. She has also been invited to give motivational lectures in schools. Recently, she was invited as a judge by the Army Public School for their cultural and literary interschool festival. Besides these achievements, she has been featured on various news and media platforms such as Times of India, Deccan Chronicle, DailyHunt, Fox Interviewer, Jinews and Zee5. His art of telling stories through poetry is absolutely phenomenal and empowering.

For her next book, titled Self-love Fairytales, she collaborates with her brother Kartik Narayanan who will make his literary debut with this creative joint venture.

He is known for his stimulating stories, rich in symbolism and originality of his plot, describing the lives of characters who undergo existential crises and a search for the meaning of life. His works often retrace metaphysical questions and prompt his readers to seek deeper meanings even in mundane life events. A master storyteller, he wrote nine books of fiction and one non-fiction. His eleventh book, a short story called The Lockdown Guest, is his latest work. He is also an educator in Kannur, Kerala, with an MA in English Literature. His major works are:

Novel – The Mythology of Love (as Marian Grace)

Documentaries – Life after the floods, how to write a book and publish it (coming soon)

Short Stories – Wall of Colors and Other Stories, Prabuddha: The Clairvoyant, You Should Know How I Feel, Stories We Live

Novella – While I wait

Ebook Series – The Southern Chronicles – Part 1 – Save the Teacher, Part 2 – Save the Girl

Amit Nangia is the author of the bestselling book “The Girl I Love” and has now launched her latest novel You Are My Love Forever with Srishti Publishers in July 2021 which you can purchase at http://amzn.to / 3x5g9aO. He creates branded advertisements by day and writes romance novels by night. He has created many award winning campaigns such as “har ek friend zaroori hota hai” and many others. you.

Anindita is an award-winning Creative Director and the author of Amazon’s bestselling “What The Pandemic Learned From Me”. During his career spanning more than 13 years, his name has been associated with reputable agencies such as Wunderman Thompson, Dentsu Aegis Network and Cheil Worldwide. A former student of the IIMC, she has launched and re-launched some of the hottest companies, evolving iconic big-budget brands as well as writing for social causes with little to no budget. His work has earned him several prestigious national and international creativity and efficiency awards and accolades, including the Spikes Asia Festival of Creativity, The One Show, Global Healthcare Awards, Effie India and Goa Fest India.

In 2020, while battling the isolation and mental challenges brought on by the pandemic, Anindita channeled her creativity and wrote her first book, “What the Pandemic Has Learned From Me.” The book was written as a modest quest to provide relief to those struggling during lockdown with an important mental health message. Two days after its launch, the book became a bestseller in the humor and self-help categories on Amazon and has so far been featured in DNA, Deccan Chronicle, The Print, Agencyfaqs, Business Standard, Washington DC Despatch, European Sun Times, Wallstreet Sentinel, East Mojo, Innfinity.com, and The Literature Times, among others.

It is often said that writing humor is not easy and writers in this genre are quite rare. Well, it looks like author Namita Das is set to turn that trend around and become a promising entry for this rare group of writers.

After making his readers tickle and laugh with his first humorous novel “It’s Punny Oops, I mean funny!” And its short sequel ‘Happily Technically, Ever After!’, The famous international publishing house Ukiyoto Publishing has released their new novel ‘Who Ate Our Food?’ This new offering also explores the genre of humor, but this time with a touch of horror. This heady mix of humor and horror promises to be a fun read.

Namita continually stays in touch with her audience through her blog http://www.penitratherkeyit.com/ which contains all updates on her work and publications of her books.

Samar Deep Singh is an Indian author and resides in New Delhi. Her recent novel “How I Failed in Love” received a warm reception and reached “bestseller” rank several times on Amazon. Her new novel ‘Love Guru connection’ is about love and the ‘web’ of relationships. He’s also working on two other tracks – “Last Days of Romance” and “Love on the Brink of Divorce”.

An avid reader who has turned her passion into a profession, Sankalpita Singh founded her book blogging platform in 2013 as a way to channel her creative energies and love for books. She ventured into book blogging at a time when people hardly knew about dedicated book platforms. Today, more than 90,000 monthly readers trust bookGeeks, and that number is only going to grow.

His fervent passion and unmatched determination have transformed bookGeeks into a multiplatform entity. While his blog bookGeeks.in has consistently ranked # 1 for book blogs in India over the past two years, his YouTube channel bookGeeks has over 20,000 subscribers. She enjoys reading and writing on all genres and is a die-hard Ruskin Bond fan. She believes in the power of reading as a habit and wants to encourage parents and children to teach reading at an early stage. She dreams of writing a bestseller one day.

Anagha Ratish is a thirteen year old bibliophile and eighth grade student. She loves everything about books. She published her first novel, Celestia Chronicles: Fire and Water, at the age of twelve. When not buried in her books, Anagha spends her time pursuing her other hobbies, such as music, ballet, and depressing (but realistic!) Poetry writing, which is evident in her book. of poetry A World of Intricacies.

An idealistic personality, Samridhi Kapoor is only 16 years old and already the youngest founder of the Indian publishing industry. Publishing Experts aims to be the premier publishing agency for authors. Samridhi holds the record for starting more than five startups in less than two months and has received the award for best entrepreneur. Not only is she a successful person, but she has also been successful in providing opportunities for others.

“If you are an aspiring writer and want to be published internationally, Publishing Expert has provided you with a gateway to your writing career,” says the Abohar prodigy in Punjab. Samridhi is also the co-founder of Instant publication. To launch We Got Talent, Samridhi teamed up with digital partner Digital Golgappa, India’s largest and most trusted marketing agency.

Disclaimer: This is a company press release. No HT journalist is involved in the creation of this content.