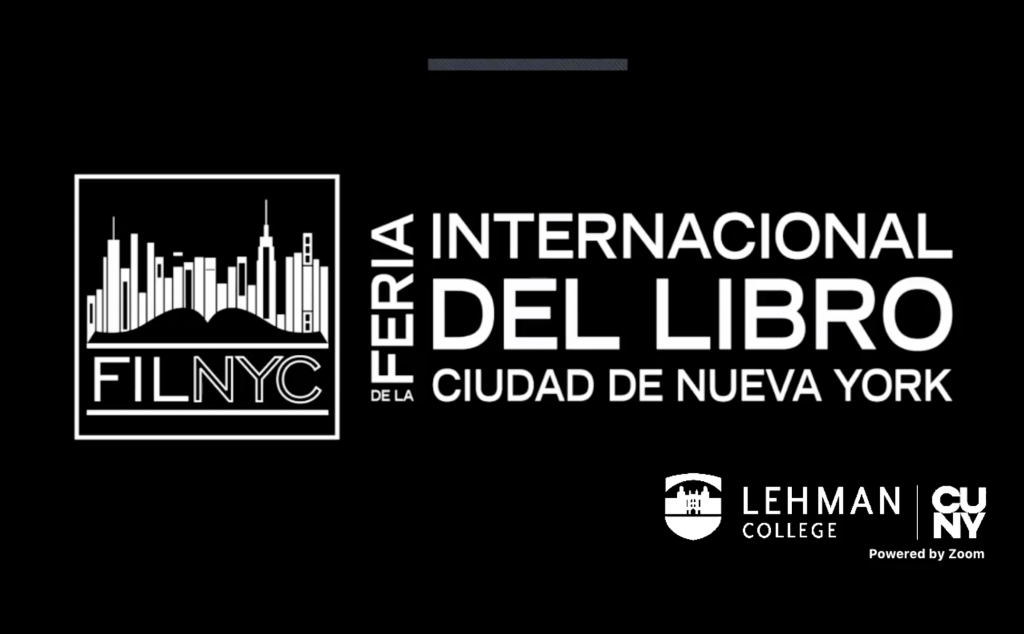 First launched in 2019, the New York International Book Fair / Feria Internacional del Libro NYC, an initiative of the CUNY Mexican Studies Institute, aims to disseminate academic and literary work published in Spanish, whether in Latin America, in the Caribbean, Spain or the United States and, at the same time, promote better reading habits among Hispanic communities in New York.

This year’s panels and virtual events, taking place October 1-3, will be streamed live on Facebook Live through the @FILNYC account. Last year, the event brought together academics and authors from more than a dozen countries, with more than 48,000 people attending conferences, panels and virtual workshops.

The program includes the following highlights. Call (347) 577 4080 for more information. To view past events, click here, for example.

Marco Ramírez Rojas, assistant professor of Spanish at Lehman, will host a conference with Rivera-Garza, a prolific and award-winning Mexican writer. Rivera-Garza is the author of six novels, three collections of short stories, five collections of poetry and three books of non-fiction. Originally written in Spanish, his work has been translated into several languages, including English, Portuguese and Korean.

The New York Times is the third most read newspaper in the United States. In this panel, four Spanish-speaking journalists – Elda Cantú, Annie Correal, Andrés R. Martínez and José Enrique Arrioja – discuss the challenges faced and the strategies followed by NYT to reach an increasingly diverse audience, in the United States and in the ‘foreigner. .

Araceli Tinajero teaches at the Graduate Center (Hispanic Literatures) and is co-founder of the Mexico study group at the Bildner Center for Western Hemisphere Studies where she has been a scholar for over a decade. In this panel, voices from Argentina, Mexico, Peru and Spain will dialogue on the role that racism, identity, representation and marginalization play in contemporary literature, and how literature can contribute to it. remedy.

Daniel R. Fernández is Associate Professor at Lehman College and Chairman of the Department of Languages ​​and Literature. He will be joined by Sonia Robles, Norma Iglesias Prieto and Daniel Salinas Basave to analyze the meaning and scope of the border between Mexico and the United States as an environment of struggles and challenges as well as creative and daring proposals in a battle continues to defend human dignity.

Are we going to cross the time barrier in the United States?
Saturday October 2
2:00 p.m. (EST)

Adriana Pacheco is a Mexican Affiliate Researcher at LLILAS Benson and a member of the International Advisory Board of the University of Texas at Austin. She will guide the conversation with Fernando Olszanski (Argentina), Pedro Medina (Peru) and María Angélica García (Venezuela) regarding the rise of Hispanic literature around the world, as well as new strategies for selling books and getting to know the reader. .

Mariano Villareal, administrator of “Literatura Fantástica”, a website specializing in novelties on fantasy literature and science fiction in Spain and renowned anthologist, will guide a panel on the relevance, trends and interests around fantasy literature and science fiction in Latin America. Mariano is joined by a large constellation of authors, namely Edmundo Paz Soldán (Bolivia), Daína Chaviano (Cuba), Martín Felipe Castagnet (Argentina) and Teresa López-Pellisa (Spain).

Between the breath and the abyss
Saturday October 2
4:00 p.m. (EST)

Between the Breath and the Abyss: Poétique sur la beauté (Entre el aliento y el precipicio: poéticas sobre la belleza) is a bilingual anthology that brings together the ideas of a select group of authors on the presence of beauty in poetry And life. For this panel, Nuria Morgado, Associate Professor of Contemporary Spanish Literature at the College of Staten Island and the Graduate Center, will lead the quartet of talented voices formed by Raquel Abend (Venezuela), Odette Alonso (Cuba), Keila Vall de la Valle (Venezuela ) and Silvia Guerra (Uruguay).

Change the Subject presents the story of a group of university students committed to advancing and promoting the rights and dignity of undocumented people from their earliest days at Dartmouth College. Triggered by an example of anti-immigrant sentiment in their library catalog, these students took their advocacy from the Dartmouth Library to the halls of Congress. The film shows how an example of campus activism entered national limelight and how a cataloging term became a flashpoint in the immigration debate on Capitol Hill. Melissa Castillo Planas, assistant professor in the English department at Lehman, has been a film producer.

Antonio Córdoba Cornejo, associate professor at Manhattan College specializing in science fiction in Spanish, leads a conversation with Colanzi, a Bolivian writer, editor and journalist whose research focuses on genres such as science fiction, horror and fantastic in modernity. and contemporary Latin American literature.

Why studies on police restrictions are now being judged