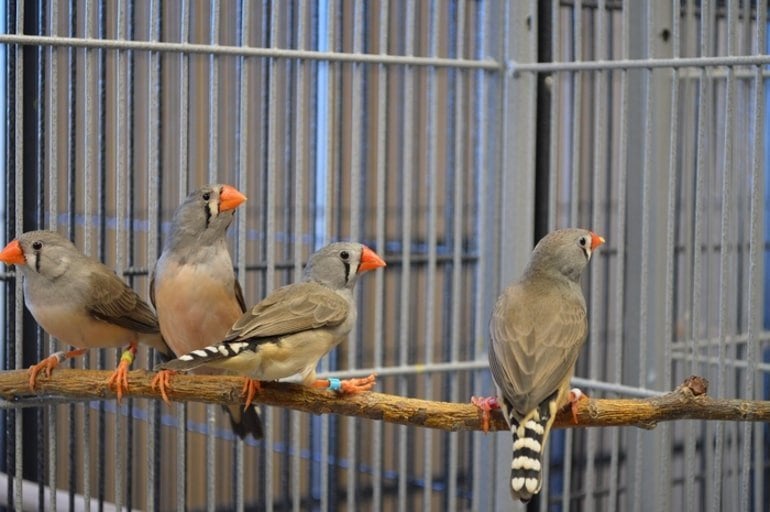 Summary: Zebra finches have stable personality traits, and some of these traits have enabled the birds to come up with innovative solutions to complex foraging tasks, a new study reports.

Personality is not unique to humans. New research published in the Royal Society Open Science journal demonstrates that zebra finches have personalities and that certain traits are consistent over two years of the birds’ lives.

In addition to showing a stable personality, zebra finches innovated solutions to new foraging tasks, where sometimes success was tied to personality type.

The article was written by Lisa Barrett and Jessica Marsh, University of Wyoming; Neeltje Boogert, University of Exeter; Christopher Templeton, Oregon Pacific University; and Sarah Benson-Amram, of the University of British Columbia, formerly of UW and head of the UW Animal Behavior and Cognition Laboratory.

The authors of the paper tested 41 zebra finches at UW from 2016 to 2018 to measure individual differences in bird behavior over time.

The authors measured a host of traits – dominance, boldness, activity, risk-taking, aggression and stubbornness – in the short term (two weeks) and long term (two years), using standardized personality tests that had been established in the literature. .

To assess boldness, for example, the authors placed a new object in a pen with a bird that had been feeding and measured how long it took the bird to resume feeding in the presence of the new object. .

To assess dominance, the authors recorded the interactions of groups of birds at a single feeder. The authors measured stubbornness – or docility – when handling the birds by counting the number of escape attempts made by the birds under a net.

“We were interested in seeing whether personality would remain stable or whether individuals would be flexible in their behavior over time,” says Barrett, the lead author.

“Repeating our tests over two years with exactly the same birds allowed us to answer this question.”

Next, the researchers tested whether personality was related to problem-solving success on three novel tasks previously used with zebra finches.

“Since individuals vary in their personality type and in their cognitive abilities, we wanted to see if these two sources of variation were related,” says Marsh, who was an undergraduate student at the time she worked on the study. .

The authors found that problem-solving success was linked to boldness, dominance, and stubbornness. For example, less dominant birds were more likely to solve two of the tasks compared to their more dominant counterparts.

This result confirms the “necessity drives innovation” hypothesis, which states that less dominant individuals—who receive fewer resources due to competition with their herd mates—may need to innovate in new ways of to access food.

“In this work, we leveraged a full suite of personality tests and multiple cognitive tasks, and we performed our work over a longer period of time than traditional tests,” Benson-Amram says.

“It allowed us to discover the importance of measuring multiple traits in understanding the connection between personality and problem solving.”

Because not all traits were consistent over time or related to problem-solving performance, the authors emphasize that future research should focus on uncovering the personality measures most important for innovation – and why some features are more plastic than others.

About this personality and current problem solving research

Consistent individual differences in behavior across time or contexts (i.e. personality types) have been found in many species and have implications for fitness. Similarly, individual variation in cognitive abilities has been shown to impact fitness. Cognition and personality are complex and multidimensional traits.

However, previous work has generally examined the link between a single personality trait and a single cognitive ability, yielding equivocal results.

The links between personality and cognitive abilities suggest that behavioral traits have co-evolved and highlight their nuanced connections. Here, we examined individuals’ performance on several personality tests and repeated problem-solving tests (each measuring innovative performance).

We assessed behavioral traits (dominance, boldness, activity, risk-taking, aggression, and stubbornness) in 41 captive zebra finches. Birds’ scores for boldness and stubbornness were consistent over two years. We also examined whether personality was correlated with problem-solving performance on repeated tests.

Our results indicate that neophobia, dominance, and stubbornness were related to successful solving, and that less dominant and more stubborn birds solved tasks faster on average.

Our results indicate the importance of examining multiple measures over a long period of time.

Future work that identifies links between personality and innovation in non-model organisms could elucidate the co-evolution of these two forms of individual difference.