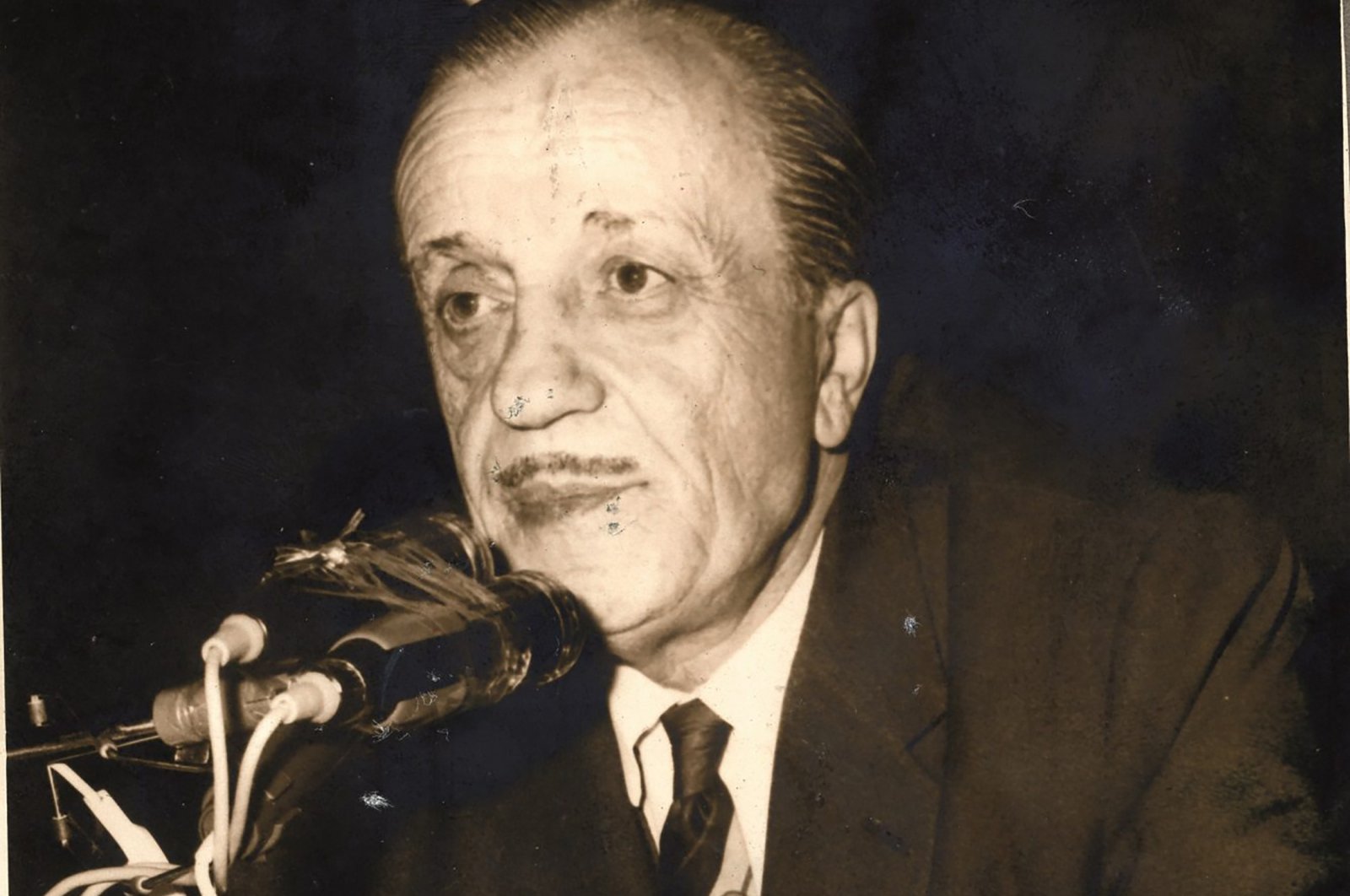 Necip Fazıl Kısakürek, who left many unforgettable works in Turkish literature, is the second person to receive the title “Sultanüş-şuara” (Sultan of Poets) in the history of Turkish literature after the 16th century Ottoman poet Mahmud Abdülbaki – simply known as Baki. That in itself shows how important he played, not just through his poetry but with his books, novels, and political causes.

Kısakürek, who was etched in the memory of Turks as “Üstad” (The Master), was born on May 26, 1904 in Çemberlitaş as the child of a lawyer named Abdülbaki Fazıl Bey and Mediha Hanım.

He spent his childhood in the Çemberlitaş district of Istanbul, in the mansion of his grandfather, Kısakürekzade Mehmet Hilmi Bey of Maraş. The master poet, who was taught to read by his grandfather when he was 5 or 6 years old, started reading novels under the influence of his grandmother, Zafer Hanım.

Kısakürek, who would later continue his education at the French School of Priests, American College and Rehber-i Ittihad Schools, completed his primary school at Heybeliada Numune School.

He enrolled in the Naval Academy in 1916, where Yahya Kemal, Ahmet Hamdi Akseki and Hamdullah Suphi Tanrıöver also received training. His first contact with Sufism – a mystical body of religious practice within Islam – was with the works “Semerat-ül Fuad” by the 17th century Ottoman poet Sarı Abdullah Efendi and “Divan-ı Şah-ı Nakşibend of the 14th century Islamic poet. the scholar Baha’ al-Din Naqshband, the eponymous founder of what was to become one of the greatest Sunni Sufi orders – given to him by his literature teacher Ibrahim Aşki Bey.

Creation of a master

The master of literature has read many works by important Western writers including Lord Byron, Oscar Wilde and William Shakespeare in their native language.

In 1918, Kısakürek began his studies at the philosophy department of Darülfünun Literature Madrasah, where he met such literary figures as Ahmet Haşim, Yakup Kadri Karaosmanoğlu, Faruk Nafiz Çamlıbel and Ahmed Kudsi Efendi. In the same year, one of his poems was first published in the journal “Yeni Mecmua”, founded by the eminent Ottoman writer Ziya Gökalp and published by the esteemed Turkish novelist Yakup Kadri Karaosmanoğlu and his friends.

In 1924, Kısakürek went to Paris Sorbonne University at the age of 20 with a scholarship from the Ministry of National Education, and a year later he returned to Istanbul and published his first book of poetry” Örümcek Ağı” (“Spider Web”).

Kısakürek aroused great admiration and interest from readers with his work “Kaldırımlar” (“Sidewalks”), which was published in 1928.

In 1932, Kısakürek published the book “Ben et Ötesi” (“I and Beyond”), in which he united his previously published poems “Spider Web” and “Sidewalks” with his new works. The book includes 71 poems written by Kısakürek from 1922 to 1932.

The author met Sayyed Abdülhakim Arvasi, one of the most profound Islamic scholars of his time and a descendant of the Prophet Muhammad – hence the title “sayyed” before his name – in 1934. All his later works were sewn with traces of mystical thought after that date, and he began to be called “Mystic Poet” and “Mr. Mystic” in art and literary circles.

“Tohum” (“The Seed”), written by Kısakürek in 1935 with advice from Muhsin Ertuğrul, and “Bir Adam Yaratmak” (“Creating a Man”), written in 1937, were staged in theaters across the city ​​of Istanbul with the director of Ertuğrul. “The Seed”, which invites people to discover the seed that Anatolia contains and recounts the liberation of Maraş in southern Turkey from French occupation, caught the attention of artistic circles but did not attract the public. attention of the public.

“Create a Man”, on the other hand, captured everyone’s attention with its plot and deep dialogue, and paved the way for its nickname “Turkish Shakespeare”.

Kısakürek started the newspaper Ağaç (The Tree) in 1936 and served as its editor. The journal quickly brought together under one roof the main intellectuals of the time and was published in 17 issues.

He married Fatma Neslihan Baban in 1941 and together they had five children named Mehmed, Ömer, Ayşe, Osman and Zeynep.

Kısakürek, first published Büyük Doğu (The Great Orient) magazine in September 1943. The weekly – which first started as a daily but soon turned into a weekly issue – included the writings of famous names of the time.

In The Grand Orient, Kısakürek revealed a specific historical accounting, state ideal, aesthetic vision and intellectual stance with his system of thought, all of which he expounded and explained in his columns titled “Ideolocya Örgüsü” (” The model of ideology”).

The magazine quickly became a government target. It was closed in 1944 by decision of the Council of Ministers and resumed publication in 1945. However, it was closed again a year later.

It didn’t end there as the magazine found readers again in 1947, but soon after it was shut down for a third time after a court ruling and Kısakürek was arrested. His wife, Neslihan Hanım, and Kısakürek, who were the magazine’s apparent owners, were tried for “publishing propaganda for the sultanate, insulting Turkishness and the Turkish nation”.

Kısakürek was imprisoned with his wife Neslihan Kısakürek, about a year after he founded the Büyük Doğu Cemiyeti (The Society of the Great East) in 1949, and was only released following the amnesty law enacted by the Democratic Party – led by Adnan Menderes – which had won the general elections held the same year.

The poem “Çile” (Suffering), which the master poet considered his “masterpiece”, met readers in 1962.

With the Great Eastern Movement, Kısakürek initiated a series of lectures that spread throughout Turkey, starting in Izmir, Erzurum and Bursa in 1963. Kısakürek’s lectures, which met people even in remote areas of the country, continued abroad.

Kısakürek and his son Mehmed founded the Büyük Doğu (The Great East) publishing house in 1973.

The Master, who was awarded the title “Sultanüş-şuara” (Sultan of Poets) by the Turkish Literature Foundation in 1980, went down in history as the second poet to receive this title after Baki. Kısakürek received the Grand Prize from the Ministry of Culture in 1980, the National Culture Foundation Prize in 1981, and the “Outstanding Service Award” from the Turkish Writers’ Union in 1982.

Leaving incomparable traces in Turkish intellectual, political and social life as well as in poetry, the master also influenced the lives of many important personalities in recent Turkish history.

With countless articles published in his various magazines, including The Tree, Rapor (The Report) and The Great East, more than dozens of lectures and interviews, and in conclusion at least 70 books published during his 80 years of life, Kısakürek died on May 25, 1983, at his home in Erenköy, Istanbul.

After a funeral prayer at the Fatih Mosque, which was attended by thousands of young people from across Turkey, the master of literature was buried in Istanbul’s iconic Eyüp Sultan Cemetery.