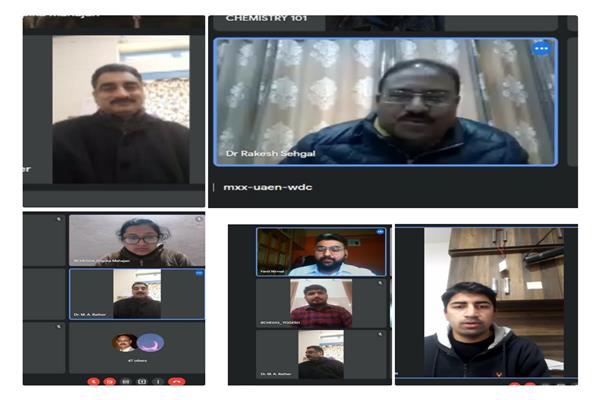 Srinagar, 04 January: The National Institute of Technology (NIT) Ecological Club in Srinagar held a virtual poetry contest titled ‘Poetry Slam’ on Tuesday, in which various environmental issues were discussed and highlighted by the participants.

The theme of the event was “Environmental Problems Faced in the Modern Age” highlighting global warming, which is the greatest environmental threat people have ever faced.

Director of NIT Srinagar, Prof. (Dr) Rakesh Sehgal said that the only way to preserve the environment and its beauty is to reduce consumption, reuse material goods and recycle our unwanted goods.

“Climate change can be solved by switching to renewable energy production, promoting the development of environmentally friendly things and upgrading infrastructure,” he said.

Professor Sehgal also appreciated the organizers for organizing such events. Such initiatives aim to create a stress-free atmosphere on campus, he said.

Professor Sehgal also shared some of his life experiences and told of his deep interest in poetry.

In his message, NIT Registrar, Prof. Kaiser Bukhari appreciated the organizers of the one-day event. He said the main objective of the event was to educate students on current environmental challenges and their possible solutions.

On the occasion, Professor (Dr) Mushtaq Ahmad Rather, who is the president of EcoCult, the ecological club of the National Institute of Technology. He appreciated the students and said such events will also be held in the future.

The participants were judged by the famous writer, star-Gazer and poet Ms. Shilpa, who was the main guest of the event. She also shared her journey and how she became a writer.

Ms. Shilpa also mentioned her first book “Love, Feel, Pain, Heel”. She said that a poem or any kind of writing will always help the person feed their soul.

Among several entries for the competition, the top 5 poems were selected for the event. Qazi Adnan clinched the top position and won the competition. While Kamran Elyas became the first dolphin, and Nadeem

The event was organized by Reet Patel and Gopika Mahajan and coordinated by Ishika Gupta and Naqshab Agnihotri, and EcoCult committee members.

On this occasion, Prof. (Dr.) MA Rather congratulated the winners and all participants. He said Eco Cult. has been organizing such events for several years. We will also continue to hold such events in the future, he said.

In conclusion, a vote of thanks was given by Reet Patel and Gopika Mahajan. They also expressed their gratitude to the NIT Director for his support and encouragement in conducting such events in the institution.