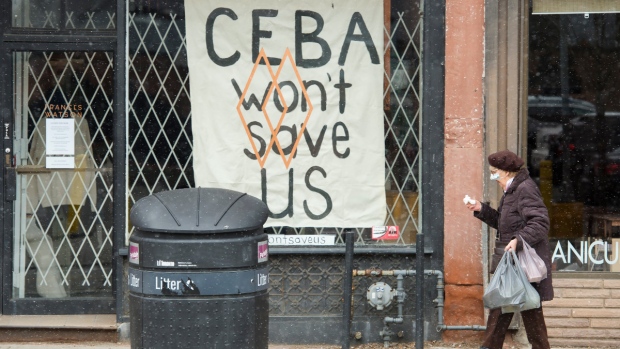 OTTAWA — Prime Minister Justin Trudeau has announced a new rental assistance program for businesses and plans to relax the criteria needed for small and medium-sized businesses to qualify for a loan, the latest indications that it will still take long before the country is back to business as usual.

Speaking about the challenges businesses and commercial property owners are facing due to COVID-19, Trudeau said Canada’s new emergency commercial rent assistance program will help small businesses cover rent for April, May and June. Assistance is deployed in collaboration with provinces and territories, as rent policy is largely the responsibility of provinces and municipalities.

The program will provide loans, including forgivable loans, to commercial property owners who must then either reduce or waive small business rent during those months, with a promise of more details to come.

Finance Minister Bill Morneau said the government is aware that many small businesses are worried about paying rent, their suppliers and their employees. He praised landlords who are already offering some grace to their tenants during this difficult time. However, some landlords have already issued eviction notices for businesses that did not pay rent at the start of the month.

The federal government is also opening the eligibility criteria for the Canada Emergency Business Account. The program, aimed at small and medium-sized businesses, offers government-backed loans of up to $40,000 to cover the costs of keeping their business afloat during the COVID-19 crisis.

Current eligibility requires applicants to prove they paid between $50,000 and $1 million in payroll in 2019, leaving out some companies on either side of those numbers.

“It’s money that entrepreneurs and employers can use to cover operational costs and meet other immediate needs,” Trudeau said.

Small Business Minister Mary Ng said she would continue to respond to needs as they arise until the country is on the other side of this pandemic.

“That means your favorite restaurant can keep the lights on while it switches to delivery service. This means that this small furniture store that typically relies on foot traffic to stay afloat, can continue to pay the costs of maintaining their storage space… This means the local bed and breakfast can maintain their property while we had to temporarily close its doors,” Ng said.

Reacting to the latest expansions in financial aid, outgoing Conservative leader Andrew Scheer said the constant evolution is further evidence of the need for in-person parliamentary sessions to get the right policies in place the first time.

The NDP had called for more rent assistance for small businesses and offered some ideas on how to do it, citing examples in other countries, including France, Denmark and Australia, which have all offered some sort of relief or subsidy.

Despite these welcome changes, small business owners are feeling the pinch and fear they will soon be kicked out.

Feron Bateman owns two clothing stores in Victoria, British Columbia. She has already been forced to close one, even though her lease does not expire until the end of October.

At around $7,500 a month, Bateman is now worried about having to pay the balance.

“It’s scary to think about,” she said. “Are they going to make you sell your house? Or are you going to lose your other store? What if you can’t keep the lease due to the COVID shutdown?”

Bateman is not alone. A grassroots group called “Save Small Business” says more than two-thirds of its members say they can’t afford to pay the next month’s rent.

The organization is asking the federal government to waive three months of commercial rent, up to $10,000 per month. He also wants more leniency with deferred debt payments.

Other small businesses are asking their owners to give them some slack during these trying times.

Maureen Khallad owns The Think Sun Preschool in Calgary and hopes her landlord will at least halve her $6,000 monthly rent as she’s been forced to close the preschool.

“We have to work together,” she said. “If a landlord stubbornly locks the door, well, I guess that’s the answer, but who’s going to fill that empty space?”

“MUST STAY THE COURSE”

On Thursday, Trudeau said while many are getting used to the new normal, over time staying home and not seeing friends will become increasingly difficult.

“We will miss our colleagues, friends, neighbors and relatives even more than we do now. But we have to be disciplined. We must stay the course. We cannot let the progress we have made go to waste,” he said.

Asked what kind of measures will eventually inform the decision to start lifting restrictions or easing public health measures, Trudeau said the criteria would include consideration of Canada’s position on the pandemic curve and the number of cases across the country.

Easing measures too quickly would be “absolutely disastrous” if Canadians had to self-quarantine again, after already spending more than a month in isolation. The earliest, he said, will be “several weeks” from now.

As of Thursday evening, there were 30,106 confirmed cases of COVID-19 in Canada.

A week ago, federal modeling predicted that by then there would be between 500 and 700 deaths from COVID-19, but the number has already nearly doubled, with 1,196 deaths so far.

Trudeau said those projections were just that and they continue to evolve, but there have already been too many deaths in Canada.

Deputy Prime Minister Chrystia Freeland told the daily ministerial update that Canadians only have to look at the devastating scenes in hospitals in other countries to see why it is essential that people continue to take heed. advice on physical distancing and self-isolation.

Ahead of his national address, the Prime Minister joined a call with his fellow G7 leaders. Speaking about what was discussed, Trudeau focused on emphasizing the collective need for a global response and said these nations also had a responsibility to help the most vulnerable countries.

The call came hot off the heels of US President Donald Trump’s statement on Wednesday night that he was seeking to ease travel restrictions along the Canada-US border, and his decision to withdraw funds from the World Health Organization. , Trudeau focused on emphasizing the collective need for a global response and said these nations also have a responsibility to help the most vulnerable countries.

Asked to speak about how other world leaders have responded to US funding for the WHO, Trudeau said only that the international health agency is “an important part” of the global fight against the novel coronavirus.

Canada has defended the WHO, which the federal government has relied on for advice and information amid the pandemic, and earlier this week signaled that now was not the time to reopen the border beyond to allow essential goods and workers to cross.

The Prime Minister doubled down on that stance on Thursday, citing the closeness and ‘special thought’ that will be given to travel restrictions between Canada and the United States, but there is ‘a long time’ to pass before they are enforced. lifted.

Incorporating Currency Compass, a monthly analysis of the real and nominal value of the rand