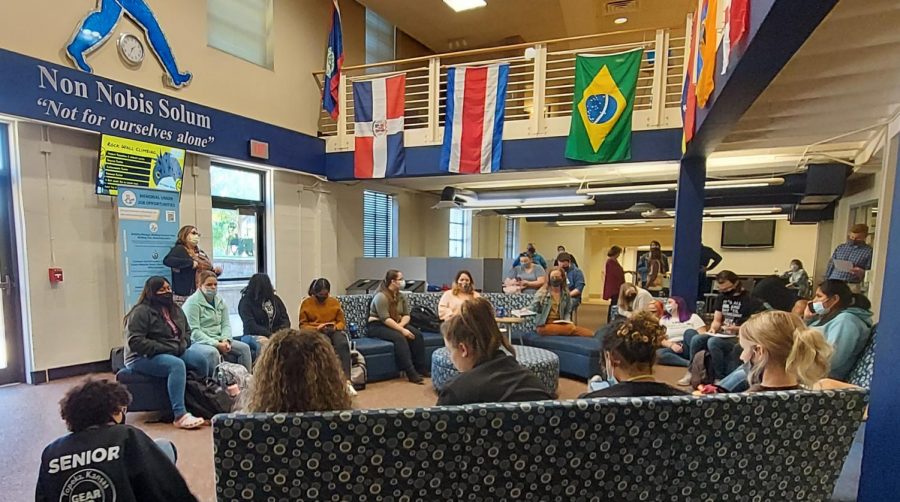 An impressive turnout: the public patiently awaits the start of the event in the undergrounds of the Memorial Union. Event host Dennis Etzel later expressed how pleased he was with the large number of people who showed up to participate and observe.

As we in Washburn observe October as Domestic Awareness Month, it is so important that we educate ourselves on the many forms that domestic violence can take, as well as the impact it can have on survivors. . One of those occasions was the Poetry Speak-Out event on Tuesday, October 19, 2021, an opportunity for poets to sign up for an open mic to read their work on domestic violence.

At 1:30 p.m. in the Memorial Union subway, the open mic was scheduled to begin and host Dennis Etzel, senior lecturer in the English department at Washburn, gave a short introductory speech to give the audience the context. In his introduction, he admitted his personal experience with domestic violence and the impact of poetry on his life.

â€œPoetry books saved my life,â€ Etzel said. â€œThis problem affects everyone: the survivors or the people you know who have survived. It’s a chance to share his voice on this and to feel united, because you are not alone.

The poets each shared their breathtaking pieces in front of the audience, surrounded by a safe and supportive space. Representatives from the Young Women Christian Association, the YWCA and Student Counseling were on hand to provide support to all in attendance.

Next, participants were encouraged to pick up drinks and pizzas from the refreshment station, as well as consult the information materials provided, with resources for people experiencing domestic violence, recovering from an experience or just anyone interested. One particular resource that stood out was a book of poems by students from Washburn and the Topeka community that were related to domestic violence and sexual assault.

Etzel co-host Dr Jericho Hockett, Director of University Assessment and Associate Professor in the Department of Psychology, explained that she and Etzel plan this event every year, in October for Violence Awareness Month. domestic, and spring is a very similar event to Sexual Assault Awareness Month. Their passion for raising awareness about domestic violence may come from different places – Hockett’s may be more of an analytical approach as she is a psychologist focused on examining social power – but it is still very evident in the way they speak during of these events and their willingness to organize and host them.

â€œSo many people have this idea of â€‹â€‹domestic violence as something that doesn’t affect them,â€ Hockett said. â€œBut it’s not just that big thing that’s obvious and on your face that necessarily has a big impact. It’s all these little currents, like the lines of a poem.