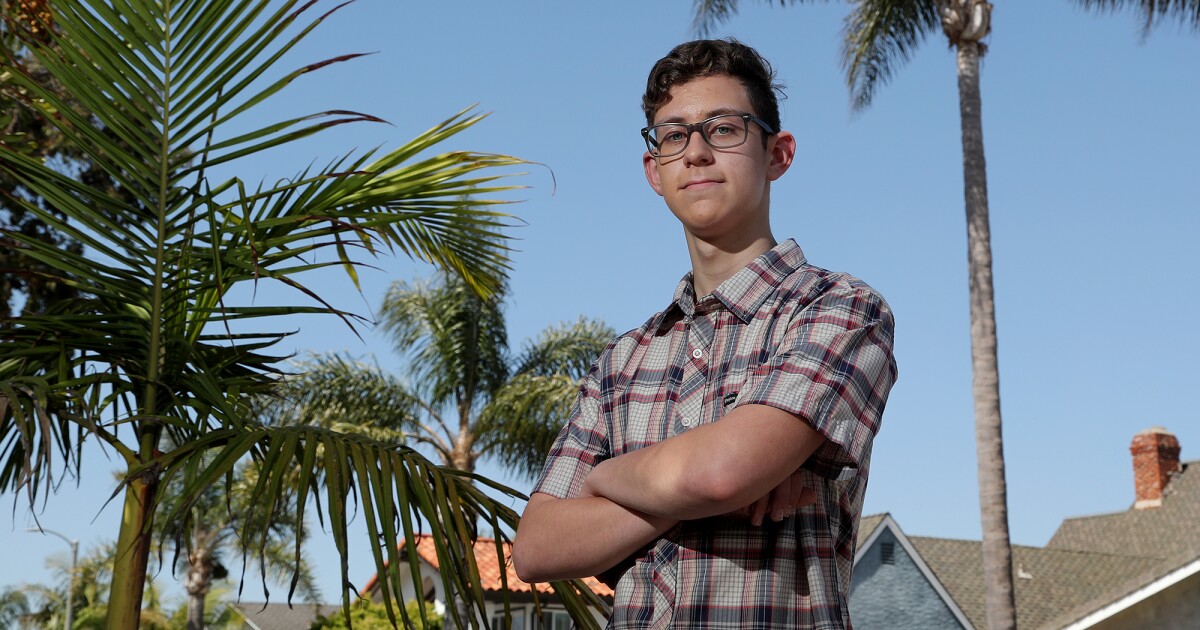 Colin Parrott was thrilled to go on a Model United Nations trip earlier this year with his classmates from Huntington Beach High.

This represented a great opportunity for the 16-year-old junior. Parrott simply hadn’t planned to put depression in his carry-on.

“We had to hand over a 10-page long document as a precondition,” he said. “A week before the scheduled date, I hadn’t worked on it and I hadn’t felt motivated. It was really that Sunday that I had the first real breakdown, where I was like, ‘ I can’t do this anymore.’ The next morning I told my mom that I was trying to tell myself that I’m just a little sad sometimes, but I think it might be something more than that.

Parrott was battling depression. His mother and father, Debbi and Jesse, worried about him on that trip to the Big Apple. But that’s when he started writing some of those thoughts down as poems.

Debbi Parrott, an English teacher at Pacifica High in Garden Grove, was moved by her son’s daily poems.

“I showed it to co-workers and they were like ‘Wow’,” she said. “It spilled out of him…There are times when there are lines like, ‘Write, wipe your eyes with a pen.’ There’s a line on the concrete rebar, he notices these details.

Colin decided to publish some of his poetry in book form, to try and help others. “Shards” is available on Amazon, and he’s hosting a book discussion, signing, and Q&A on Friday night at the Community United Methodist Church in Huntington Beach. Pre-registration is required and can be done at eventbrite.com/e/shards-book-release-celebration-tickets-346349660157.

NAMI Orange County and Project Hope are partnering with the event to provide resources.

“Few people are willing to talk about [depression]so the fact that [the book] is able to be there, it’s a conversation starter,” said Project Hope program manager Mary Lu. “It’s not like someone is going to read it and be like, ‘This is exactly my process,’ but they can identify themselves, talk to someone, and start that conversation.

“I think what’s really cool is the order. This shows that it is an ebb and flow of these symptoms. It doesn’t disappear all at once, it’s more of a process.

The poetry book is an approximately two month collection of poems by Colin, from March to May (each is dated). “Shards” is divided into three parts: depression, recovery and acceptance.

“Initially, we were going to have Part 3 as ‘joy,’ or ‘hope,’ or ‘closure,'” Colin said. “But as we went along, I realized it’s not really something you get to. You can’t really fully recover from depression. It’s not just going to magically go away. … I wanted to show people how high and low it is.

Colin has been on medication, Lexapro, for his depression, and his mother said he’s had a good few weeks recently. However, there were two times before that when he attempted to injure himself, the second time with shallow knife cuts to his upper arm.

“I’ve never experienced this with any of my kids,” said Debbi, who also has high school freshman Ash, who is a transgender boy. “He showed me this as soon as it happened, and it was scary. We locked everything up and he slept with us that night. He made a contract with us and the therapist that he wouldn’t s would not self-harm.

Colin said the moment was definitely a low point for him.

“I didn’t think it could get worse, and it only got worse,” he said. “You have all these negative thoughts that make you want to punish yourself because no one else is punishing you. That’s what made me do it…but I’m getting better and hope to keep doing better.

Colin, who has a 4.02 GPA at HBHS, is also a member of the Huntington Beach City Youth Council. He said he wanted to be a lawyer or an ambassador to the United Nations one day.

His favorite poem in “Shards”, which can sometimes be painful to read, is called “Sunset (Relapse)”.

At one point he invites the reader to “take a ride through me, letting you peek under the rug and behind the curtain, see the disjunctions, leaps and missing pieces like a broken record”.

In the book’s afterword, he encourages those who might be struggling with depression to find their own outlets. The book ends with the listing for the National 24-Hour Suicide Prevention Lifeline: (800) 273-8255.

As for Colin’s journey, he knows it’s not over, but he’s glad the book is over.

“Twenty poems after this one, I’m still writing,” he says. “It’s always a cathartic experience.”

Support our coverage by becoming a digital subscriber.