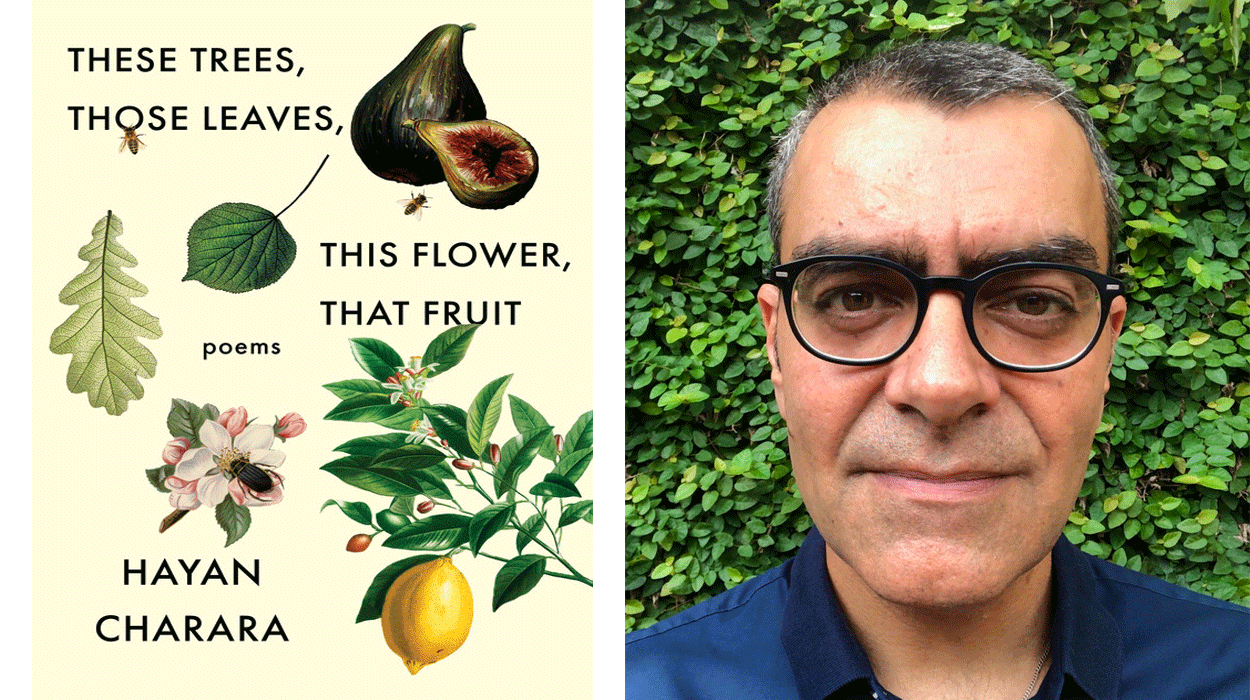 One of the reasons why poets write poems about poetry is that the philosophy of composition is inseparable from the way of life. Even if they wanted to, these things couldn’t be treated as separate species. So not only is any poem, as Brenda Hillman wrote, “the story of writing itself”, but it is also the story of the writer who writes it, even if it is as far from memory as possible.

At the heart of Hayan Charara’s strange and dazzling fourth collection, titled These trees, these leaves, this flower, this fruit, a title that uses deictic blurring to argue for the mysterious luminosity of precision and specificity – is a poem called “Fugue”. Sometimes the lines – taken, sometimes with only slight modifications, from Philip Levine – sound like prose, other times like excerpts from another lyric poem. It weaves together Charara’s language and the words of several others, and it moves from an argument about war and doublespeak to an argument about poetics – about how to write poems – back and forth between two subjects. Often the style is sober but very compressed; supple but impatient, beautifully abrupt.

And we come to lines like this: “A big part of being a poet is looking others in the eye. Look into each other’s eyes. Accept vulnerability. Followed a few lines later by Levine’s voice, echoing like a ghost through Charara: “A political poet doesn’t necessarily tell people / how to vote, how to think, or what specific attitudes / they should have, but s deals with the political facts of our lives—” before specifying what it is: “that we live at the whim of people with enormous power / and very little compassion, that there is very little justice… These questions culminate on the next page with lines like this:

I don’t want to be close to the centers of literary power and be
influenced by them. It’s very dangerous. you can cheat
think that because people come to your readings
or buy your books, you really are a great poet.

Charara was born in Dearborn, Michigan – “Henry Ford’s hometown”, he calls it in a poem – into a vibrant Arab-American community nonetheless plagued by suspicion and stereotypes from white neighbors – in a poem recounting a moment of anti-Arab sentiment sweeping the city, “1979”, a father knocks down a man who knocks him down. The man lived. The poet lived for a time in New York, earning a master’s degree at NYU and selling Christmas trees in Central Park to supplement his graduate student allowance. These days, he teaches and writes in Houston. Part of what he teaches in this book, and what its title invites, is the act of getting details right. We are waging a war against abstraction, it seems, as much as a war against injustice or fascism. “Philosophers bore me,” says one of the voices of “Fugue,” before telling the story of a philosopher who rented his house and left seven trees to die and had the jaded temerity to act surprised by its owner’s negative reaction to that fact: ” ‘I didn’t think you were / the kind of man who would care about something like that.’ It was / the voice of the philosopher, ‘something like that ‘ – a living thing. But the question of how to be a poet and how to write poems? For Charara, they are always as personal as they are existential: one poem in the book ends with the poet’s father putting a gun to the temple of the poet, trying to get him to drop out of poetry and stay in medical school. (The same man who knocked down the pedestrian who flipped the bird over to him.)

And the stakes are higher, of course, when you’re bold enough – in these times, especially – to offer didactic frankness in poetry: a reader might always wonder if the very poetry I read meets their own standards. ? In this case, the answer is a wonderful yes. “Fugue” is only a demonstration of what the poet is doing. “All These Questions You Ask” – layers of specificity, disparate facts stitched together so they form an open song – is as good a place as any in this book to see the power of dizzying leaps , magnificent and wild, associative of Charara. but consistent:

I know the pitfalls. I caught a pigeon
when i was a boy at the age
by Kodachrome. I posed with a gun
for a black and white photo.
I thought I looked like a youngster
Paul Newmann. you thought
Omar Sharif, right? In Syria,
Iraq, Iran, Kuwait, Egypt and Libya,
men with smooth hands
stamped my passport, served me
mint tea, rolled cigarettes, recited
poetry, and joked about their wives,
their presidents, their Gods.
In the name of God, I cursed a thousand times
the name of God. Once,
I paid for a prostitute. It was Amsterdam,
I was young, she taught me
don’t be ashamed…

You can almost see the mind leap from lily pad to lily pad, each transition both an outgrowth of the previous phrase and yet delightfully surprising. And what the prostitute teaches the young man brings me back to the first poem of the book, a kind of lyrical mini-declaration, four lines long, another mode that he uses with astonishing skill:

Young I thought of anger and shame
would do in their time
go away. God,
I was so beautiful then.

JESSE NATHAN: How do your poems emerge? How do they find their shapes? At what point in the process, and with how much foresight or planning? I imagine the answer is very different depending on the poem.

HAIAN CHARARA: At the beginning, twenty-five or thirty years ago, I hardly thought about form. I was reading poets who did things that made me lose my mind and I wanted my poems to do the same, but I didn’t bother to figure out how or why. One word sums up my poetic thinking as a young poet: imitation. Two words refer to it more precisely: thoughtless imitation.

Little by little, my emulation took on a more definitive form. I noted the way they made sentences, how they ordered and separated the words in these sentences, into pieces, into lines, and I took note of the subjects they dealt with in the poems – that is, -say what they deemed worthy of poetic attention. My early education therefore echoes a story I had heard about Hunter S. Thompson, who allegedly copied, word for word, some of Faulkner’s stories and all of Hemingway’s. A farewell to armsjust to find out what it was like to write a “great” piece of literature.

I bring this up in part to emphasize something that has remained the same for the last thirty years or so: whatever choices I make, I don’t stop it until I’m as certain as I can the being that the poem does something version of hitting the reader’s head, however it manifests – breaking their heart, stopping them in their tracks, forcing them to rethink or re-examine something. I focus on all things that collectively fall within the realm of form: syntax, line endings, enjambment, stanza breaks, poetic structures, turns, etc. Usually, however, I have in mind first and foremost the impact of the poem – what it can leave behind, what impression it can make on a mind, on a body.

Let me talk about an example in more detail. Take my poem “Mean”. It’s a sequence of poems – although at first I wasn’t trying to write a sequence. I was just writing these little poems, and the idea of ​​putting them together came to me after writing them, separately, over a long period of time. I wrote each poem, however, it turns out, with the notion of “wickedness” in mind, in advance, in at least two ways.

First, for better or for worse, when it comes to the mean things I say, do, or think, especially about others, the meanness stays with me, lives with me – in the form of guilt or shame – far longer than any act of wickedness. kindness always has. I imagine that’s typical for a lot of people. As would be, I imagine, the fact that I don’t really care to expose the embarrassing, guilty, or shameful things I’ve said, thought, or done. Again, for better or worse, naughtiness – mine or someone else’s – strikes me as infinitely more fascinating than kindness. I suspect the same is true for other people. If I said to you, “I did something really good today and I screwed up too, but I only have time to tell you about it,” what would you choose to hear? Anyway, the poem emerged because I started noticing and paying attention to the acts of wickedness I had committed in my life.

Second: For a while, and certainly while I was writing the poems that make up “Mean,” I’ve been thinking about poetry—there are so many these days—that tries to indicate the poet’s moral character, either explicitly or implicitly. . Poems that announce “I am a good person”. Poems that reveal what is wrong with the world, or the country, or the people, then proclaim the various ills that afflict humanity, as if to say, “I am on the right side of history.”

Poets of recent times seem to crumble under the pressure to portray themselves as “good” people far more than writers of fiction. I remember reading about the Bret Easton Ellis controversy American psycho, and the most astonishing complaints against the novel, I thought, came from those who assumed that the narrator’s voice, intentions, and malice were identical to those of the author. It’s an outrageous assumption to make about any novel, any work of fiction. Fortunately, this is not trivial. This is not the case with poetry, however. More often than not, if not almost always, we take for granted that the poet and the speaker are interchangeable, that the voice and the spirit of each are one. This must be one of the explanations behind why so many poems seem to be written under the compulsion of goodness and correctness – the anguish of being seen as bad, as a morally or ethically corrupt person, guiding the subject, the tone, the arguments, etc. of a poem.

I hate this impulse. I hate its gravitational pull, especially on me. Others can write about whatever pleases them, I don’t care. But I want to write against the impulse to show my goodness and fairness. Notice, I think I’m a decent human being. I’m not perfect, not even close, but I’m not a bad person either. As far as my poems are concerned, it is neither here nor there. My poems don’t care if I’m good, decent or righteous. Readers may care, but if you’re a reader like me – if you read my poems like I read other people’s poems – then you don’t care if I’m a saint or a sinner.

If you care, that’s fine. You can keep reading my work, but you don’t have to, and you can think what you want of them or me. If you read on, however, what I hope you’ll end up seeing in the speaker or poet is a human being, with admirable traits, perhaps, but also with flaws – someone you can believe to be “real”. And to be “real” requires a voice that tells the staff in a way that opens up to embarrassment, guilt, even shame.

Protection by a fourth dose of BNT162b2 against Omicron in Israel