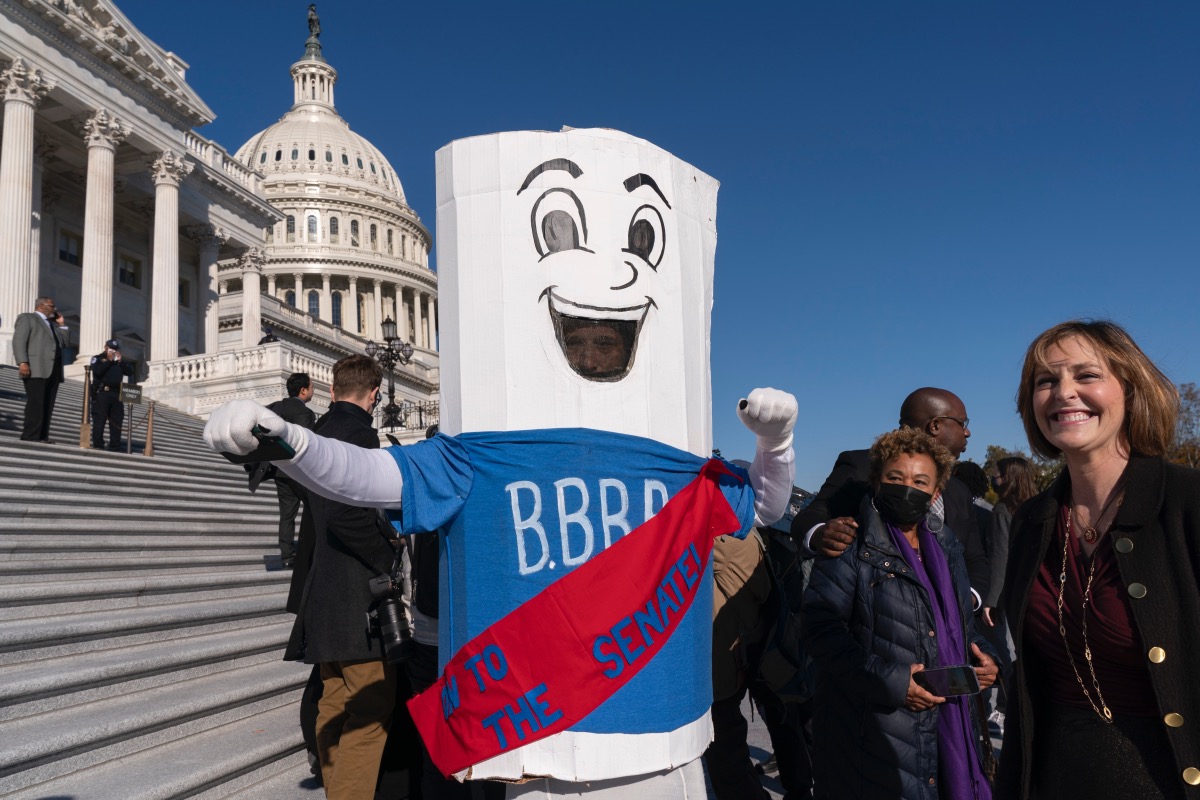 One year – 12 short months – can make all the difference in the world.

Around the same time, a year ago, COVID-19 was in the middle of a winter wave endangering family reunions. A busy election had a clear winner and a clear loser.

A year ago, the economy collapsed, businesses closed and offices nationwide lay empty. Masks and Zoom calls were the norm. Meeting friends and family for coffee and a meal didn’t feel right, let alone safe.

Now, a short year later, we have vaccines. We even have boosters.

Man disguised as a “Build Back Better Bill” wears a scarf saying “to the Senate” on Friday, November 19, 2021, as House members including Rep. Kathy Castor, a Democrat from Florida, right, leave after vote on the bill on Capitol Hill in Washington. PHOTO: AP Photo / Jacquelyn Martin.

President Joe Biden’s Build Back Better plan ensures that our COVID-19 recovery and a better economy is for everyone and for the long haul, not just the next two years. It’s a plan that finally sets the stage for the 21st century economy that should have started over 20 years ago. It requires new jobs, new industries, new sources of energy, new ideas and new priorities on what our national standards should be.

The House just passed the BBB plan, and when the Senate passes the bill, we will see a unique opportunity to radically transform the well-being of millions of Americans for the better.

â€œWe didn’t get everything we wanted in BBB (no one did). But it’s not controversial to assert that the United States – especially the economy – had several systemic flaws before. the pandemic. COVID-19 laid bare them. The bill corrects too many of these flaws for the Senate to wait for or negotiate essential investments. “

Our Quaker organization worked closely with dozens of faith-based organizations and voters to discuss with Congress the moral imperative of this bill to ensure fairness and justice for people across our country. . Our faith obliges us to â€œlove our neighborâ€ and to see all of God’s people flourish. Building Back Better reflects this, investing in children, families, communities and the environment.

Build Back Better provides universal kindergarten for three- and four-year-olds and an investment of around US $ 150 billion to build, rehabilitate and improve more than one million affordable housing units. It provides thousands of visas to immigrants currently on waiting lists, creates safeguards for undocumented communities, and invests over half a trillion dollars in clean energy and addresses the ongoing climate crisis.

We didn’t get everything we wanted in BBB (no one did). But it is not controversial to assert that the United States – especially the economy – had several systemic flaws before the pandemic. COVID-19 has laid them bare. The bill corrects too many of these flaws for the Senate to wait or haggle on essential investments. But BBB does more than just fix what was broken. This is truly revolutionary legislation for everyone in our country, which gives us a chance to start from scratch. BBB is making significant progress in reducing economic and racial disparities across the United States on issues affecting children and families that have not been adequately treated for decades.

Yes, a lot has changed in the past 12 months. But far too many have not. To create lasting positive change, Congress must embrace Build Back Better, making the United States stronger through investments in our people.

Our country and our humanity are stronger when we recognize the inherent dignity and worth of each person. It’s something we can all agree to get into the holiday season.

Diane Randall is the general secretary of the Committee of Friends on National Law, a national, non-partisan Quaker lobby for peace, justice and the environment.