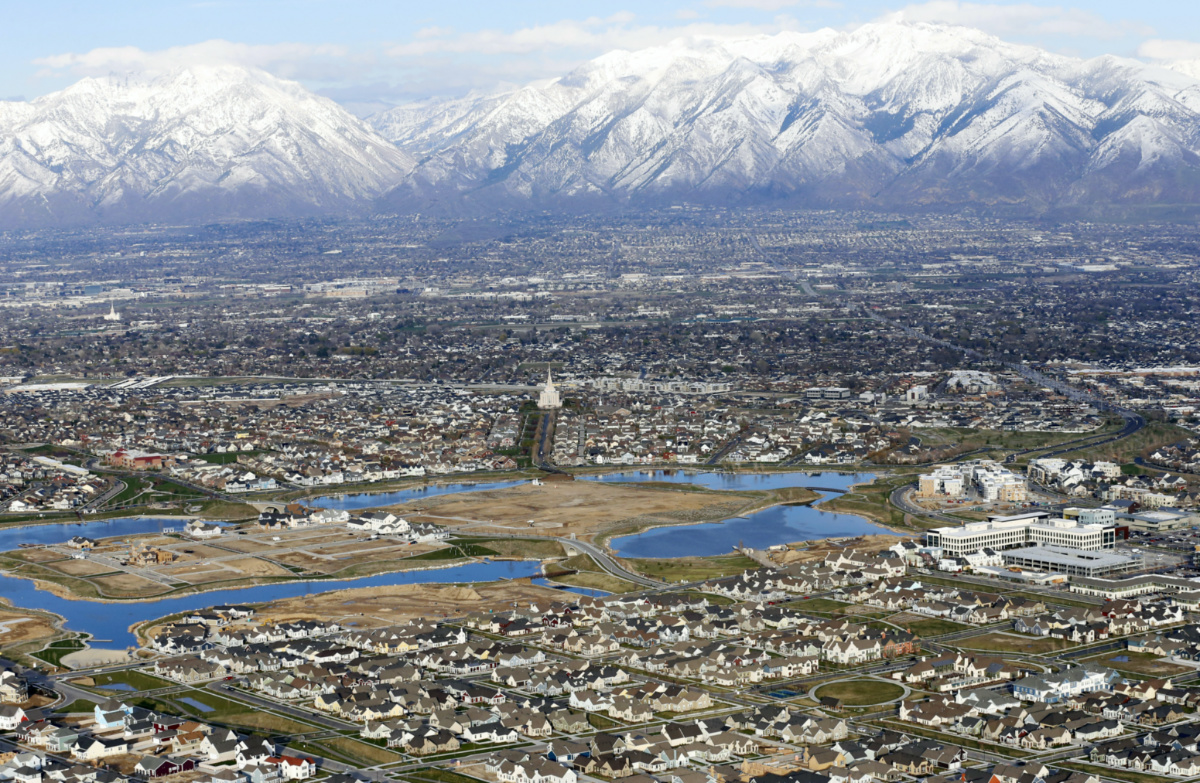 In the early 19th century, during the first era of infrastructure development in the United States, Christians were among the country’s most ardent supporters of what were then called “internal improvements,” and its political leaders did not. Delayed in citing the moral imperatives for the development of the country.

In his first annual message to Congress, published on December 6, 1825, President John Quincy Adams presented a bold plan for infrastructure development. He refused to separate the nation’s communications and travel networks from what he called “moral, political and intellectual” improvements.

Homes, in the suburb of Salt Lake City, are shown on April 13, 2019. Utah is one of two western states known for its rugged landscapes and wide open spaces that go against the growth trend sluggishness of the American population. The boom there and in Idaho comes with healthy economic expansion, but also concerns about pressure on infrastructure and soaring house prices. IMAGE: AP Photo / Rick Bowmer / file photo.

Adams believed that progress in these areas were social “duties” and “obligations” assigned to all Americans by “the Author of our existence.” As President of the United States, he felt he had a â€œsacred and indispensableâ€ responsibility for â€œthe progressive improvement of the condition of the governedâ€. Anything that did not exercise this responsibility was “criminal and heinous”.

For Adams, God was on the infrastructure side.

“Congress Democrats don’t seem to agree on two of the most important pro-life bills Congress has ever considered. If they can’t come together and pass Biden’s bipartisan infrastructure bill and one version of his Build Back Better plan, it will be a huge moral failure It should concern all Americans, but especially Christians.

He concluded his speech by announcing that the same “Creator” responsible for “the superior excellence of our political institutions” also called on citizens to use their freedom “for charitable purposes, to improve their condition and that of their people. similar “. To do otherwise, Adams warned, would be “to reject the blessings of Providence” and “to condemn us to perpetual inferiority.”

Today, the need to restore America’s infrastructure goes beyond protecting our place in the world. We must protect our people.

In June, a pedestrian overpass fell on Route 295 in Washington, injuring several people. He was in bad shape.

In July, an electrical cable on a bridge in Portland, Oregon, warped in 112-degree heat, forcing the city to temporarily shut down its streetcar system.

More than 77 million Americans do not have access to adequate home internet connections, a reality that emerged during the COVID-19 pandemic.

Urban schools are collapsing and struggling to find teachers. Some Americans don’t have clean water to drink. Costs for child care, prescription drugs and health care are skyrocketing.

Joe Biden wants to do something about these issues. If we care about life, so should we.

Still, Democrats in Congress don’t seem to agree on two of the most important pro-life bills Congress has ever considered. If they can’t come together and pass Biden’s bipartisan infrastructure bill and a version of his Build Back Better plan, it will be a massive moral failure. This should concern all Americans, but especially Christians.

The moral imperative behind Biden’s bills is more urgent precisely because the internal improvements of the 19th century did not reach all Americans. On May 24, 1844, Samuel B Morse, a devout Calvinist and son of a famous clergyman, sat in the chamber of the Supreme Court of the United States and sent the first telegraph transmission. The words he typed were from the Old Testament Book of Numbers: â€œWHAT DID GOD DONE?

As historian Daniel Walker Howe noted, Morse’s choice of phrase could not have been more appropriate. He believed that his invention, and by extension all internal improvements and technological advancements, promoted divine purposes in the world. He would later say that the Bible verse he sent on the sons that day “baptized the American Telegraph with the name of its author”: God.

In the early years of the American Republic, it was understood that God’s blessings on the United States went hand in hand with scientific progress and the expansion of the country’s transportation and communications infrastructure. Telegraphs, roads, bridges, canals, and railroads would help build America and, at the same time, help the gospel spread to every corner of the continent and beyond.

These expansion efforts across North America, giving people the opportunity to rise above the tyranny of the place, would make the nation exceptional and its people free. It was what God had done for the United States.

The pursuit of progress has often led Morse and his generation to dark places. For Morse, progress meant keeping Catholics out of the country. In 1836 he mounted an unsuccessful bid for the mayor of New York on the Nativist Party ticket.

Progress, as Morse understood it, also led him to defend slavery. He sadly said, â€œSlavery in itself is not a sin. It is a social condition ordered from the beginning of the world for the wisest, benevolent and disciplinary purposes, by Divine Wisdom.

The Morse God did not offer the same opportunities to poor Irish and German immigrants as he did to middle-class white Anglo-Americans. Under the banner of “Manifest Destiny,” his God purged the continent of indigenous peoples who stood in the way of progress.

Morse’s life and career reminds us that the development of infrastructure in the 19th century opened up the American Dream to some but not all Americans. Biden’s infrastructure proposals, on the other hand, represent an investment in the lives of Americans who have been left out of previous internal improvement efforts.

Not only will the president’s plans create jobs, but they will improve public schools in poor neighborhoods, connect less fortunate Americans to the information highway, integrate urban neighborhoods separated by interstate highways, strengthen transportation by common, repair damaged roads and bridges in urban areas and make a significant investment in historically black colleges and universities.

Christianity teaches that human beings are created in the image of God and thus called to exercise their creativity in the world. Improved transport and the communication of knowledge (whether by telegraph or the Internet) open up important possibilities for such work. They constitute a scaffolding which allows women and men to flourish.

Biden’s infrastructure plans represent a significant break with Morse and his fellow god-worshipers. We should commend Biden for looking straight into the past and fixing what’s broken.

It’s time to add infrastructure to the pro-life agenda.

John Fea teaches American history at Messiah University in Mechanicsburg, Pa., And is the editor of Current.

A person of many shades