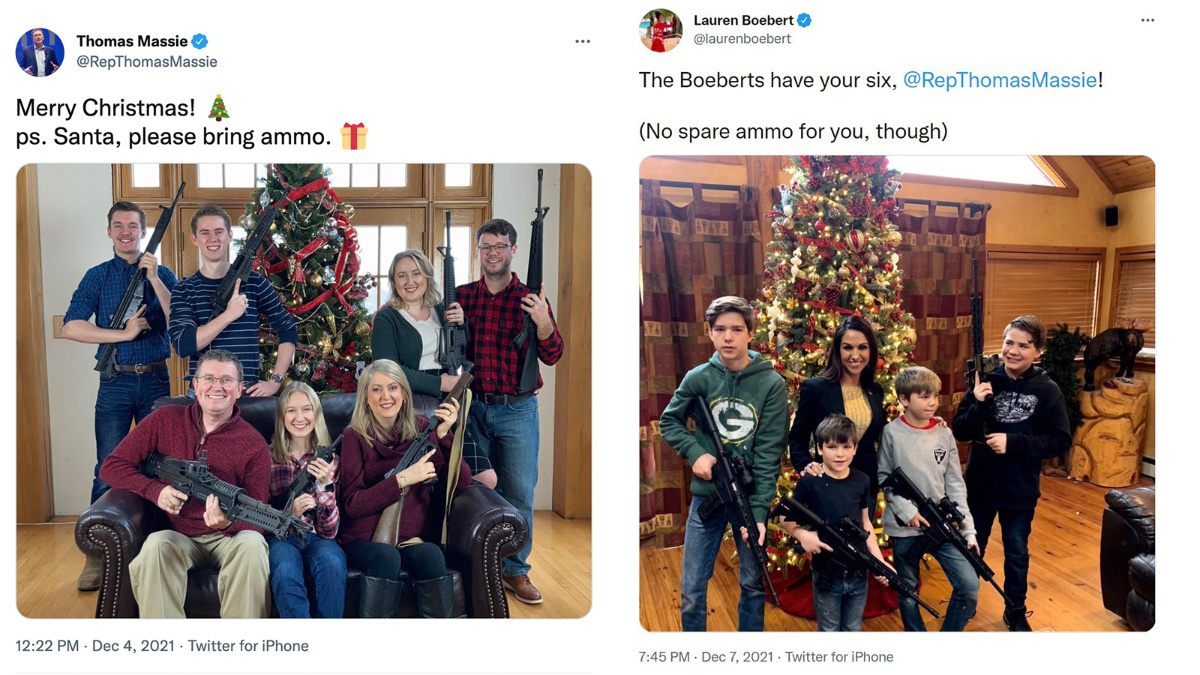 Earlier this month, U.S. Representative Thomas Massie posted on his Twitter what looked like a Christmas family photo, except each smiling person inexplicably posed with a gun. Within days, fellow representative Lauren Boebert responded with a similar photo. In both cases, the cannons were in the front and center, while the Christmas tree in the background was partially cropped out of sight.

It’s tempting to ignore these provocative photos as just the bizarre behavior of a few politicians seeking attention on social media. But imitators weren’t far behind; we are now seeing this behavior emulated by local elected officials (such as Maury County, Tennessee, Mayor Andy Ogles).

It is disturbing to see more and more swaggers jump on this trend as families across America come together to celebrate the birth of the Prince of Peace – especially this year, as gun deaths at across the country hit a record high.

For Christians, Christmas is a time to commemorate the birth of our Savior. Of course, each family has its own unique and sincere traditions. Some of us sing Christmas carols or string popcorn around a tree. Other families have favorite treats – pumpkin pie or peppermint mocha. I used to decorate sugar cookies every Christmas with my grandma, and my wife’s family really love gingerbread houses. Some of our traditions are a bit far-fetched, like wearing ugly sweaters and picking mistletoe from a tree.

“[N]Never would I have imagined pictures of children in Christmas clothes holding assault rifles as a fitting way of honoring Christ. We can’t stay silent when something so contrary to the Christmas message starts to take over, adding to a real war on Christmas escalating one photograph at a time. “

But I never would have imagined pictures of children in Christmas clothes holding assault rifles as a fitting way of honoring Christ. We can’t stay silent when something so contrary to the Christmas message starts to take over, adding to a real war on Christmas escalating one photograph at a time.

Are these politicians and those who follow suit aware that the photos contrast sharply with the Christmas Christ, who commanded us to love our enemies and died forgiving those who crucified him? Are they aware that the publication of such images could distress families who have lost loved ones to gun violence? More than 43,000 lives have already been lost this year, intimately represented by the many seats that will remain empty around the Christmas dinner table.

Jesus, the Son of God, embodied the power of non-violence by coming to Earth as a child – as many families with newborns will discover this year, a baby has great power to change their world. without the slightest violence. And of course, Jesus would grow up to preach a message of non-violence in the Sermon on the Mount.

When soldiers come to arrest and execute Jesus, one of his closest friends defends himself with a sword to protect him. Jesus’ response is astounding: He scolds his own disciple and heals the injured persecutor. It was a difficult and very counter-intuitive lesson: “He who takes the sword dies by the sword … There is another way.”

In the Christmas story, King Herod was so threatened by this baby that he recklessly used violence in an attempt to preemptively kill Jesus. What frightened Herod was the possibility that the infant Jesus could be a fulfillment of the prophet Isaiah’s vision of a prince of peace toppling kingdoms that persist in violence.

Isaiah had many other visions, one of which directly inspired my own work: â€œThe people will turn their swords into plowshares and their spears into pruning hooks. Thanks to RAWtools, we’ve turned countless donated guns into useful garden tools, including hand plows and plow forks. Each time we do so, we disarm hearts and forge peace through a simple question: What if we commit to solving our problems without weapons or violence?

RAWtools is headquartered in Colorado Springs, and this Advent season we just opened a new location in Philadelphia. Si Massie, Boebert, Ogl).

Together, we can both stop a real war on Christmas and make a dent in literal wars fueled by gun violence.

As a bonus, I’ll be happy to take the family photo for them – this time with plows and shovels in hand.

Shane Claiborne is an activist, author and co-director of Red Letter Christians.