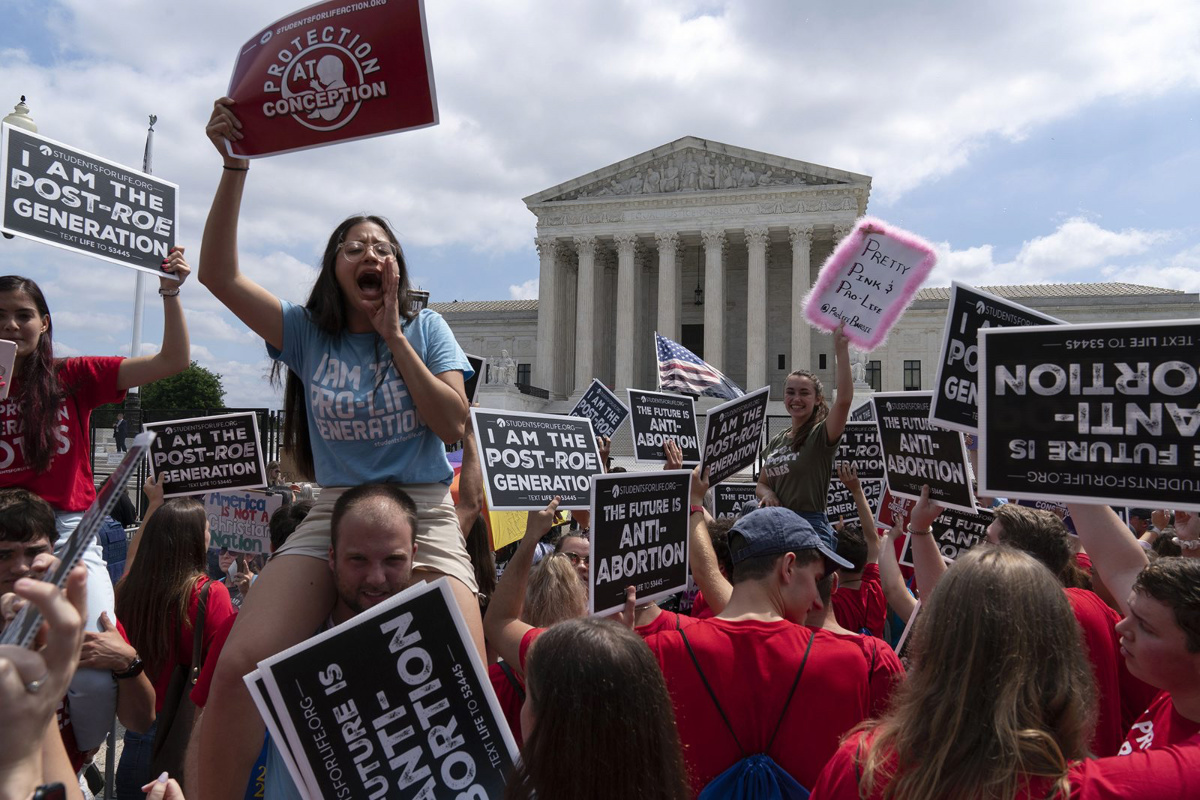 Didn’t you know there were two other phases? You are certainly not alone.

Anti-abortion protesters celebrate outside the Supreme Court in Washington, Friday, June 24. The Supreme Court ended constitutional abortion protections that had been in place for nearly 50 years, a move by its conservative majority to strike down the court’s landmark abortion cases. PHOTO: AP Photo/Jose Luis Magana.

Pro-life 1.0, which has been documented in the masterful book by Daniel K. Williams Defenders of the Unborn: The Pro-Life Movement Before Roe vs. Wade, was a politically complex movement, coming mainly neither from the right nor from the left. It attracted a significant force of Catholics opposed to both the violence of the Vietnam War and the violence of abortion.

Pro-life 2.0 emerged in the late 1970s and early 1980s, formed when evangelical Christians joined a “fusionist” Republican coalition: working-class clerics (including the so-called Reagan Democrats) , small government libertarians and foreign policy hawks. It made for some strange bedfellows.

“With Dobbs, we now have Pro-life 3.0, a movement that finds itself, after Roe, free to be much more creative and politically nimble, especially as it works to support women and protect prenatal children at the state level. This task is less likely to fall into the toxic left-right, life-to-death fights that we’ve seen at the federal level.”

With Dobbs we now have Pro-life 3.0, a movement that finds itself, after Roe, free to be much more creative and politically nimble, particularly as it works to support women and protect prenatal children at the level of the State. This task is less likely to fall into the toxic left-right, life-to-death choice struggles we have seen at the federal level.

I have changes previously highlighted in pro-life movements in this regard, especially when it comes to supporting women and families with new public policies. This newfound freedom gives pro-lifers the space to make a genuine offer of dialogue to abortion rights supporters. For our democratic republic to work, we must get out of the catastrophic spiral of tit for tat power games to find ways to discuss and move forward on these issues.

The majority in Roe determined by decree that prenatal children did not count as persons. Citing the 14th Amendment, Dobbs substituted a new context in which abortion exchanges, arguments and dialogues actually matter.

So let’s put on our big boy and big girl boots and make a trade that matters.

In a dialogue, it is important to lead with what you are for, rather than what you are against. Both sides should look for possible common ground, which can then be used as a basis for even more dialogue.

Pro-lifers have worked for decades to build vast networks of pregnancy counseling centers. Pro-choice activists could come to see how these centers provide women who feel compelled to abort with resources and therefore choices. Many would like to expand into safe havens, especially for women facing domestic violence (which is strongly correlated with abortion). Can we work together to better fund and expand these resources and show that these centers offer resources and therefore choices to women who feel compelled to have an abortion?

Some readers may be uncomfortable with this suggestion, having been told that these centers try to trick women who want abortions into coming to see them when obviously no abortions will be offered. But I’ve met hundreds of workers at these centers over the decades, and not a single one had the goal of cheating on women. Moreover, in states where abortion is or will soon be banned, these centers will be the first available infrastructure for women and families who find themselves in difficult situations.

Let’s also make pro-lifers uncomfortable in this dialogue, especially those left over from the Fusion era, in which many have embraced the “small government” sensibility. It’s a travesty that Mississippi, the state that served as the backdrop to the Dobbs case, strips economically vulnerable mothers of Medicaid coverage 60 days after giving birth.

Indeed, the United States as a whole has a huge maternal mortality problemmost of which comes into play after birth. Pro-lifers should be pushed to side with expanded Medicaid services, especially (but not only) in states that severely restrict access to abortion.

They should also be pushed to side with mandatory paid family leave, childcare assistance, strong family-based labor protections, health insurance that cares provision of children with special needs, compulsory areas and times for the expression of breast milk, etc. .

This, again, may make some old-school “government shouldn’t pick winners and losers” pro-lifers uncomfortable, but that’s what we should expect from a genuine dialogue beyond differences. As the Focolare teaches, uncomfortable conversations sometimes require adopting the posture of Jesus abandoned on the cross. Issues often involve topics that touch us deep within, and making ourselves vulnerable in this way opens us up to experiences that can be quite painful.

Fortunately, many who identify as pro-life conservatives are becoming deeply skeptical of companies that pay for abortions but are stingy in providing childcare, family leave or other supports. These profit-driven dynamics result in many pro-lifers to say that the “choice” of abortion is not a choice at all.

Disagreements over abortion are very real. Balancing a woman’s bodily autonomy with justice for prenatal human beings is complicated. But, properly understood, they are not – or should not be – life versus choice, right versus left fight to the death. Most Americans have fairly complex views on abortion that don’t fit neatly into binary categories.

If we want to help women lead the life they choose, we must start with clear and obvious common ground that is there to be taken. At present. Let’s put tribalism and animosity aside and go get it. Together.

Charlie Camosy has spent more than the past decade as a professor of theological and social ethics at Fordham University. He is the author of five books, including, most recently, Resist the throwaway culture. He is the father of four children, three of whom were adopted from the Philippines.