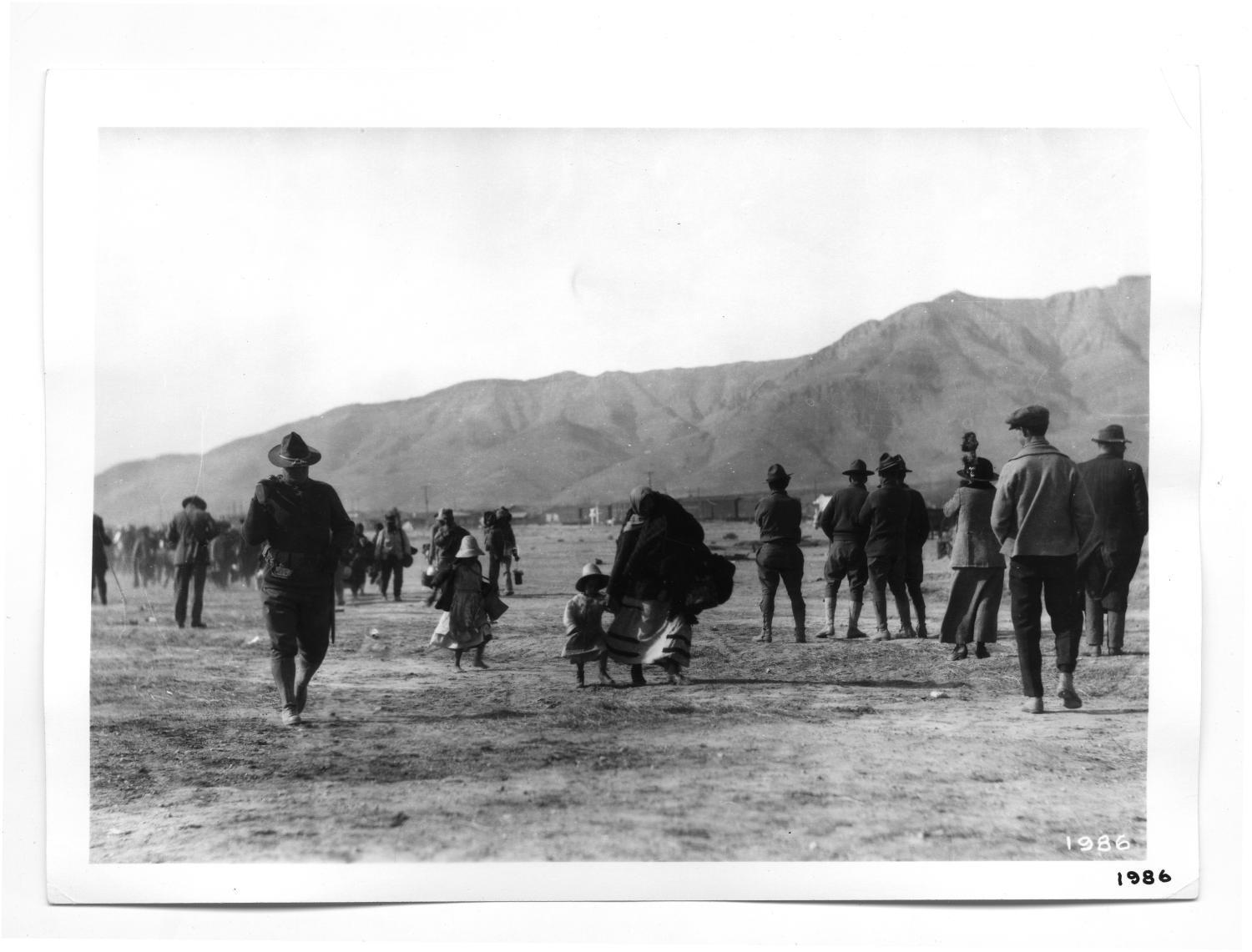 To correct our abusive border policies, we must first face our history

In January 1914, after a bloody battle of the Mexican Revolution in Ojinaga, south of what is now Big Bend National Park, Mexican federal soldiers, as well as civilians, men, women and children, crossed the border to take refuge in Texas.

US soldiers intercepted the refugees near Presidio in West Texas and forced them to travel 70 miles through ruthless desert terrain to Marfa, where they were loaded onto trains and “shipped” back to it. west to Fort Bliss. There the refugee prison camp, built in part by the prisoners themselves, was surrounded by a barbed wire fence stacked 10 feet high and buried deep in the ground to prevent escape by digging – a fencing technique used to keep pigs in their pens.

Up to 5,000 prisoners lived in tents, without running water or adequate medical care. The stress of war, exhaustion from their long journey, and exposure to extreme desert temperatures took their toll. Dozens of death certificates indicate that prisoners died of pneumonia, dysentery and acute gastroenteritis. Young children and pregnant women were particularly vulnerable. Records show that at least two mothers gave birth to stillborn babies in prison. One, Pedra Mareno, gave birth to Anacleto Esquibel, but he died eight days later. His death certificate indicates that he died “without medical attention”. Luz Rodriguez gave birth to a girl whose life lasted only five days. The suffering of these prisoners was widely reported in the press at the time. Local residents of El Paso came to the prison to see the caged refugees, others came with notes for people they knew in the camp. US soldiers on guard kept spectators and friends from approaching the fence.

A century later, it would be nearly impossible for us to understand the grief and loss of these mothers, made worse by their imprisonment so soon after escaping a civil war. Unfortunately, it evokes feelings that are far too familiar. Fort Bliss is once again a place where refugees and asylum seekers are held in inhumane conditions. El Paso, where Fort Bliss is headquartered, is once again a place where mothers cried out for their children.

In 2017, El Paso was selected to lead the policy of inhuman family separation that ultimately removed nearly 5,500 children from their guardians. The children ranged from teenagers to newborns, some taken from their mothers while they were still breastfeeding. Health professionals have called the policy state-sanctioned child abuse and torture. Thousands of Americans protested the practice and called for accountability, but none came. It was not until January 2021 that the Inspector General of the United States Department of Justice released a report concluding that former Attorney General Jeff Sessions’ policy of indicting border residents with crimes (thus paving the way for the The Trump administration’s family separation policy) prioritized prosecution over expenses related to “considering the impact of family unity lawsuits and child separations.”

The 2021 GA report offered only meager recommendations for improving coordination efforts between agencies to â€œensure effective implementationâ€. Many historians and jurists have described the policy as being guided by white supremacy and as being in violation of international and human rights laws committed by the US government. Human rights organizations have criticized the separation of families as a crisis “of the government’s own initiative.” Amnesty International’s Erika Guevara-Rosas said: â€œThe authorities have chosen to target the very families seeking safety in the United States, adding to the trauma and pain they have already experienced.

A particularly inhumane part of the family separation policy is that the Trump administration failed to create any structure to ensure that parents and children would ultimately be reunited, despite a series of court orders demanding reunification. An interim report by the Biden task force released in August showed that nearly 2,000 children have still not been reunited with their families – a fact that shows how horrific the effects of the family separation policy continue to be. .

What is needed is a truth and reconciliation commission in politics, to create a clear record of responsibilities and harms and to define remedies. People often believe that violence is followed by reconciliation and that time heals all wounds. History proves the contrary. When violence is left unaddressed, it continues to shape societies and institutions for generations.

This is true in the case of the child separation crisis of 2017, and it has been true for more than a century along Texas’ border with Mexico, with its long history of violence against Mexican migrants. The Fort Bliss refugee prison camp in 1914 was just the start of a growing campaign to detain and quarantine Mexican migrants all along the southern border. It was also a campaign fueled by racist attitudes and dehumanizing rhetoric.

Politicians and the media have routinely clustered people of Mexican descent living on either side of the border, regardless of their citizenship. They viewed “border Mexicans” as racially inferior to white Americans, part of a “mixed race” – part Spanish and part Indian. They have been described as bandits, revolutionaries or murderers who should not be trusted to own property, vote in elections, or attend schools with white children.

Hundreds, if not thousands, of border residents have been killed by law enforcement and vigilantes in the decade alone during and after the Mexican Civil War.

This violence has continued in new forms for generations. America has apparently never ceased to view the border as a violent place, and Mexican and Latin American migrants and refugees as gang members, potential terrorists, and threats to democracy.

The suffering at Fort Bliss also continues. The second anniversary of the El Paso massacre in August 2021 was marked by three damning reports from whistleblowers of abuse and gross neglect at the Fort Bliss emergency reception center, where children are held in tents .

These reports described the conditions that put children at risk and the â€œphysical, mental and emotional damage affectingâ€ children. Whistleblowers have sounded the alarm on hundreds of COVID-19 cases due to overcrowded and insecure conditions; insufficient access to drinking water, food or sanitation. The conditions were so dire that the children reportedly suffered symptoms of severe depression, prompting staff to remove items like pencils and nail clippers.

These reports were horrific, but shouldn’t have been surprising. In 2018, the ACLU reported on â€œunsanitary, unsafe and overcrowded CBP detention centersâ€ for unaccompanied children. The report included accusations of U.S. customs and border protection officials who abused, assaulted and threatened children with physical or sexual violence while in detention. The children said they were beaten, beaten and worse.

It didn’t have to be that way. America has already tried to cope with the arrival of thousands of children at our border and has learned that it is completely unprepared.

After all, in 2014, the United Nations High Commissioner for Refugees detailed the concerns of the thousands of children who have arrived in the United States. He found that 58 percent of the 404 children they interviewed were fleeing regional violence, gang extortion, abuse in the home or criminal industry recruitment and exploitation of human trafficking.

Rather than hearing appeals from UNHCR, the then governor. Rick Perry warned, â€œour citizens are under attackâ€ and sent 1,000 Texas National Guard troops to militarize the border. Texas Department of Public Safety Director Steven McCraw spoke of an increase in the number of cartel members, criminals and terrorists entering the United States.

To understand how poorly treated Latin American migrants are, consider the contrast between the appalling conditions for children at Fort Bliss and the Afghan refugees who are welcomed there with open arms as part of Operation Allies Welcome. While we can celebrate the assistance provided to vulnerable Afghans, it serves to underscore that Latin American migrants are still treated as a criminal and security threat, rather than as people in need of assistance as well. Many do not even see these migrants as people, but as a threat to be neutralized by the police and mass incarceration.

On a more optimistic note, the contrast should also remind us that the United States is more than capable of meeting urgent humanitarian needs.

All the pain now experienced along the border and in the camps at Fort Bliss, and the long history of animosity towards people of Mexican descent, reminds me that we live in a world that has been shaped for centuries. Helping with the change that should be at the heart of the Biden administration’s approach to the border. But to be successful, President Joe Biden will also have to grapple with the recent history of his own party.

For decades, Democrats have ceded the immigration debate to an increasingly nativist agenda. Since the Clinton administration in the 1990s, too many people have chosen to be “tough” on border security just as they have chosen to be “tough” on crime or the war on drugs. Few Democrats have been prepared to face the long history of racist animosity that has inspired our immigration policies.

How many more children will have to be imprisoned, what additional suffering will we have to see, for a Democratic administration to break the patterns of violence and abuse in our immigration policies?

MuÃ±oz Martinez is an Associate Professor of History at UT-Austin whose work shedding light on the history of racial violence along the Texas-Mexico border has earned him a 2021 MacArthur Genius Fellowship.

IN MEMORIAM: THE FIRST LADY OF PACHTO LITERATURE – Journal