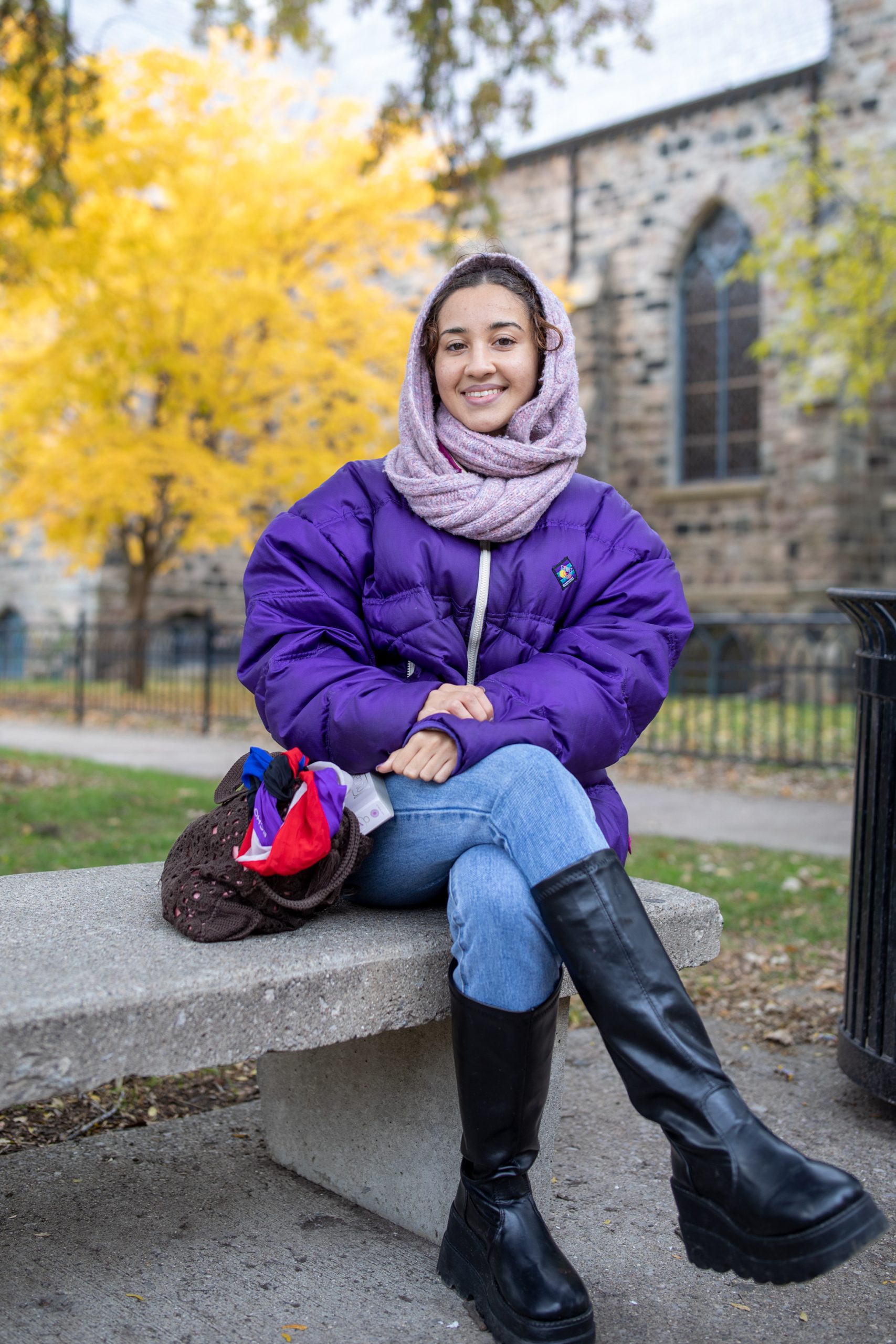 U of M Humans

Inspired by Brandon Stanton The humans of New York, Daily photographers traveled to campus to photograph U de M students. Here are the people they met:

“Definitely visual culture is what interests me the most, media studies, film and television media studies and sound culture, so words, sounds, vibrations are what excites me as a as a writer, as a poet of the word more than anything else. I have always written, I wrote stories when I was little. I love to combine words with images to write books, and I continued to do this stuff privately until I got to freshman year of high school and met Molly Rainer. She basically started a lot of the spoken word poetry in that area, and she came at my high school when she was on tour with Dante Clarke, that’s another poet here, that’s Poet Laureate from Richmond, California and they were shooting for the movie that they made Romeo is Bleeding, which is based on a play they played in the bay area. So they came to m We were in school, Skyline, and I was in African American social studies class and we had to write poems for our first intro and everyone was like ‘oh share your poem share your poem!’ so I shared my poem and Molly was like ‘come introduce yourself!’ because she was still there, and I ended up doing the same thing when I started going there, it was intern and then go to high schools and share poems and bring in teenagers.

“My dog, Athena, is two years old and I have been taking care of her for a year now. My ex-boyfriend actually had Athena, and after a little while he said he couldn’t take care of her anymore. So I decided to take care of her. It was really difficult because obviously I’m a student. I wouldn’t really have chosen to have a dog in college because it involves a lot of responsibility and takes a lot of time. But, I found a way to take care of her here, and she really likes it and appreciates the people here very much. On our walks on Friday and Saturday nights, there are a bunch of drunken students who are like, ‘Oh my god, can I pet your dog?’ Once this guy was so drunk, when he leaned over and tried to pet her, he fell on his face. We met a lot of people on campus and she loves it.

“My name is Donovan. I have been studying Mandarin Chinese for seven or eight years, starting in high school, all the way through my undergraduate years to now. In the summer of 2018, I am went to China to study abroad. It was my first time to practice my Mandarin, which had been fully learned in a classroom in the West, to use in China. It was definitely an experience unique because I wanted to see how the language used in the classroom is shown in a real setting rather than a mechanical learning environment. I can definitely say that it was a unique experience, not only for having left the country and seen a completely different culture from mine, but also to understand the dialect differences and the local culture, and how the locals perceive foreigners who speak Mandarin, so when I was in China, I didn’t really experience any culture shock in a sense, because I had studied Chinese for so long before going to China, I knew Chinese culture and customs very well. But the most interesting thing was to review how the Chinese language is used and spoken in a real environment. When I was in China, we took classes in class but we also went on field trips with our class. And we were able to communicate with locals on a variety of topics. Naturally, the Chinese that the locals spoke to us was not as familiar as we learned everything rigorously mechanically throughout the manual. With the grammar patterns, the vocabulary we had, we didn’t tend to learn the slang they were speaking. But again, often once they saw a stranger talking to them, they would try to speak as clearly as possible to make sure there was no language communication barrier.

Student in Master 2 in Arabic Pedagogy

“I was born in Munich, my father is German, my mother is from Georgia, so from the United States. So I grew up in a bilingual household and so from both countries I’m from the south, so it’s, I don’t know, I like to embrace it now. Before, I was really embarrassed, but yes, I’m a second-year master’s student studying Arabic pedagogy. I love it, it’s a mix of Arabic grammar, Arabic teaching methodology, and also applied Arabic linguistics. So it’s funny because U of M actually pioneered the field in the west but as my cohort is 4 people right now so it’s really small but we have a strong program like in Middle East, U of M is well known for that, but nobody on this campus knows. So I don’t know if I really like it, that’s the only reason I came to Michigan. Nobody I knew had ever been to Michigan, so yeah, that’s what I do.

“Hi, my name is Petra Mihalko. I’m an 18-year-old freshman here at the University of Michigan. I mean, I grew up in Michigan. I’m from south Detroit. I’m studying currently studying the Middle East, so growing up where I’m from has really affected me – being from an area that’s one of the only areas in America that has a large Arab-American and Muslim population So it’s a culture shock to get to Ann Arbor, even if it’s only 45 minutes away.

Yeah, I guess, another thing that’s interesting about me is that I’m a transgender student here, she/her pronouns and it’s, uh, it’s been very nice and comforting to come here in the Michigan. It’s like a very open, welcoming place, a very pleasant environment.

“I am passionate about dance. It’s fun and it’s a break. It’s also expressive. It’s something I’ve always done so it’s like a routine.

I definitely found myself a bit lost at first here because it’s just a lot more intense than I was ready for; it was not something my upbringing had prepared me for. I think it’s easy to get lost in all there is to do and not really do anything. I kind of found a community more in Ann Arbor than in Michigan, just working in restaurants and stuff like that. I still feel like I didn’t like the ultimate fulfillment in the school so much as in the city itself; I think it’s a really cool place and there’s so much to offer, like outside of school, clubs and classrooms. There are so many people around, if you like to look a little out there, then you might find someone who is more like you than you think.

“What inspires me on a daily basis are the women leaders around me. A lot of the clubs I’m in, the presidents or directors are women, and they are really powerful, motivated and busy. They are women who do it on their own, and I really admire them.