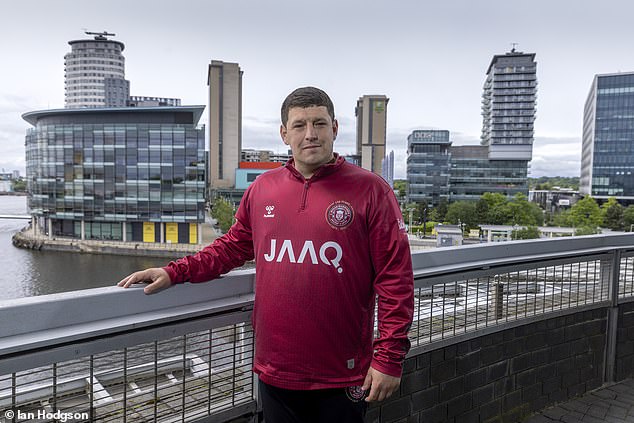 Matt Peet stands on the top floor balcony of the famous Lowry Theater in Salford. Turns out it’s a fitting place to meet the cultured Wigan Warriors head coach.

“I love theatre,” the 38-year-old Sportsmail volunteers. “I also like poetry. I love William Blake. And I like to read. I read a lot of Stoic stuff, like Marcus Aurelius.

An 18th century poet and a Roman emperor turned philosopher. Not names you’d expect to find in conversation with any of the coaches taking part in the Challenge Cup final.

But again, Peet is full of surprises, including how he wrote his thesis for his English degree on the works of George Orwell – an apt author, he points out, for a Wiganer born in 1984 .

“I just wanted to be different,” admits the Super League’s youngest boss, who has just finished reading The Power of Now: A Guide to Spiritual Enlightenment. “All my friends were doing physical education and sports science and I wanted to break with the stereotype.

“I wanted to go to university and English was one of my strongest subjects. I probably would have taken the teaching route.

‘I did my dissertation on Orwell – the difference between the first stuff he wrote, like The Road to Wigan Pier, then ending with Animal Farm and 1984. It was interesting. 1984 is a fantastic and frightening book.

As for Peet’s own road to Wigan Warriors, it actually started the same time he was reading Orwell in college.

After quitting playing to focus on his studies, a friend asked him to help coach the Bolton-based Wesoughton Lions juniors. It’s something he continued, alongside a part-time job at a gymnasium, even after graduating from Manchester Metropolitan with a 2:1.

Then, in 2008, he got his break with Wigan as a scholarship coach. Aside from a year as a performance manager for the Sale Sharks rugby team, he has since been at his boyhood club, taking on the under-18s, overseeing the academy, to now be in charge of the first team.

“It’s funny because I’ve always wanted to travel, meet new people, experience new things – and I found myself at home where I started,” laughs Peet.

“I only played semi-professionally, but what I missed in the playing experience was that I was able to learn very well as a coach.

“I am a coach, not a player. I’m proud of it. It’s quite old-fashioned to think that to be a top coach you have to be a top player. Coaching is a profession in its own right.

Peet, as you can imagine, has read many books on leadership and management. So, which sports coaches does he admire the most? “This question means a lot to me,” he admits after a long break.

“I like to watch coaches who have had sustained success like Sir Alex Ferguson, Bill Belichick (of the New England Patriots), Phil Jackson (formerly of the Chicago Bulls).

“I work closely on myself with a life coach called Craig White. He opens my eyes to different ways of thinking. Over the last five years my coaching has become a bit more conscious. Our players do a lot of yoga, meditation and breath work Every day there is an element of mental fitness.

“In pre-season, we went to a military camp. A lot of it was about leadership and communication, making good decisions under pressure. We had a conversation with the Gurkhas, which was really powerful.

“We are working hard on the connection between the group. We bring players together in small circles and encourage them to open up and be vulnerable. One of my core philosophies is that the players don’t work for me, I work for them.

Whatever work he does, it pays off. Wigan are third in the Super League table and are in their first final in five years of a Challenge Cup competition they won eight times in a row from 1988 to 1995, when Peet used to go to Wembley as a supporter.

“I went to four or five finals when I was a kid,” he recalls. ‘I have good memories. Whether it’s getting up early to hop on the coach, getting your face painted, making banners, seeing the stores dressed in cherry and white.

“I can’t remember ever being nervous about a game. I used to watch Wigan week after week and they had the best players and the best team.

“You only realize after the fact how much you took them for granted. You don’t realize that you are in a particular era. It’s probably like being a Manchester United fan for a while. You feel like it will last forever.

Of course, that’s not the case and the record 19 Challenge Cup winners haven’t actually lifted the trophy since 2013. It’s a drought that Peet is desperate to end against Huddersfield Giants at Tottenham Hotspur on Saturday. Stadium, which hosts today’s final. instead of Wembley for the first time.

“Even a year without a trophy is too long,” adds Peet. “Every year is a missed opportunity. I absolutely hate sitting at home watching the Challenge Cup final if we’re not there, so I’m so glad we don’t have to.

“The club’s history is not heavy, it takes us forward. I like that expectation. If you don’t want that, go somewhere else.

“I’ve never known anything else because I’ve played for Wigan school boys, coached Wigan academy and I’m a Wigan fan. It would be a really special moment to get a another trophy for this great club.